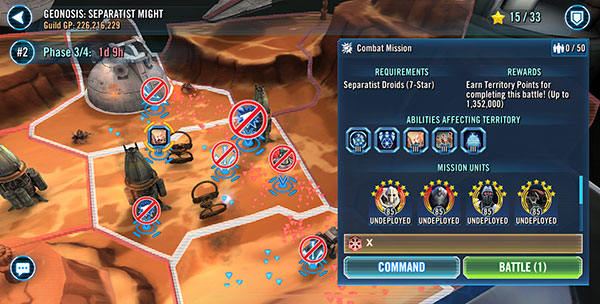 The Geonosis: Separatist Might Territory Battle in SWGoH features four Phases which last 36 hours each. Phase 3 features 3 territories as players battle with ships and ground troops. In the Middle Territory in Phase 3 there is a Combat Mission requiring the use of Separatist Droids as well as the Geonosians Special Mission fighting for Wat Tambor shards. To fight in the Phase 3 Combat Mission you must have 7-star Separatist Droids and there is no power requirement.

The following is a Walkthrough of my experiences in the Phase 3 Combat Mission that may be updated over time.

My Roster of Separatist Droids:

The total power of my Separatist Droids for this battle is 107,365 with General Grievous as my (obvious) leader.

08.16.19 – The first battle sees 5 enemy Clones, one with loaded TM hitting my MagnaGuard immediately and gaining an assist. B2 is first for me and uses the Hailfire Tank which is at full strength, then the next two attacks hit the Staggered enemies to remove their TM. Grievous gets an AoE, I summon the B2 Rocket Trooper and here we go. On his initial AoE Grievous landed multiple Target Lock debuffs which is great for the Turn Meter, and I time it where he kills off three of the Clones to gain 3 stacks of Separatist Affiliation and I move on.

The second battle sees me enjoying using this team a bit much and I forgot to note how many enemies, but I believe there were 4 or 5. One Jedi Consular and several Clones are no match for this team as I take out a Clone Sergeant and Medic and I believe a Sharshooter leaving a Clone Trooper and the weak Jedi Consular for the end, wiping them out with ease. As I finish this battle I have 69 stacks of Droid Battalion and 5 stacks of Separatist Affiliation heading into the next battle.

The third battle has two Jedi, the Vanguard and Eeth Koth, along with two Clone Sharpshooters and a Clone Trooper. I get an early Hailfire Tank attack and AoE from Grievous to gain significant momentum. This early start means this battle is a breeze as I have no trouble moving on.

The fourth and final battle sees my B1 with 48 stacks of Droid Battalion and the team with 6 stacks of Separatist Affiliation as I face 6 enemies. The Jedi Vanguard is accompanied by 5 Clones, 2 of which are Elite and 3 already are Entrenched. The JV is my focus to start and after 4-5 attacks I am surprised at how well it is going. My B2 called the Hailfire Tank and Grievous is up with an AoE which lands a Target Lock on all enemies. RNG is smiling on me today… I start spamming them with AoE attacks when possible and quickly remove the JV and Clone Trooper Medic allowing me to shift my focus on to their attackers. The 4 remaining are all Entrenched so I go after the Clone Sergeant and Sharpshooter first, gaining more kills for Grievous and upgrading my buff to the quite valuable Separatist Loyalty. At this point with just Ponds and the Elite ARC Trooper left I take out Ponds first and can focus 6 versus 1 on the ARC Trooper for the surprisingly comfortable win and 1,352,000 territory points.

08.30.19 – In the early days of Gear 13 it was clear that General Grievous was a great character to take to g13 early, and I have yet to be disappointed even a little. In a recent video from Operation Metaverse they advised that B1 was a great Gear 13 character for all of the extra offensive firepower, so here I am testing that out once again (and so far I like what I see).

Hailfire Droid (Full Strength) to start and debuffs everywhere, then a couple of attacks later B2 hits and AoE which triggers all of the Stagger debuffs and I am off to an awesome start. The first battle is so easy that I almost feel bad and Grievous already has two stacks of the Separatist Affiliation buff (click to learn more about Separatist Affiliation & Separatists Loyalty).

Heading into the third battle the only concern I have is the Droid Battalion stacks on my B1 are down to just 63 (Droid Battalion ability explained), but by the end of this battle I lose only two so I have 61 going into the final battle along with 6 stacks of Separatist Affiliation. I take out the weakest Jedi, Eeth Koth (go figure) and then move on to Ponds since he has some crazy rocket attacks AoE that hits hard. B2 Rocket Trooper calls GG to kill him off, the GG kills Aayla and I am up to 9 stacks of SA and rolling. Grievous continues to crush the Galactic Republic killing the Clone Sharpshooter and I am all-in with complete Separatist Loyalty, a huge buff that is defined in the links above and a real key to success in these longer battles. This proves to be a huge boost and this Combat Mission really has become “easy” at this point, as hard as it is for me to say that. Win. 1,352,000 Territory Points.

09.13.19 – The only real difference in my roster is that I have added Relic Amplifiers to General Grievous, B1 and B2. There has not been any whale activity here yet, but GG and B1 are Relic level 2, and B2 is level 1.

The first battle goes according to plan with Grievous getting two kills for 2 stacks of Separatist Affiliation, and the second battle mirrors the first leaving me at 4 stacks. The third battle is also easy at these gear levels (and the addition of a couple Relic Amplifiers).