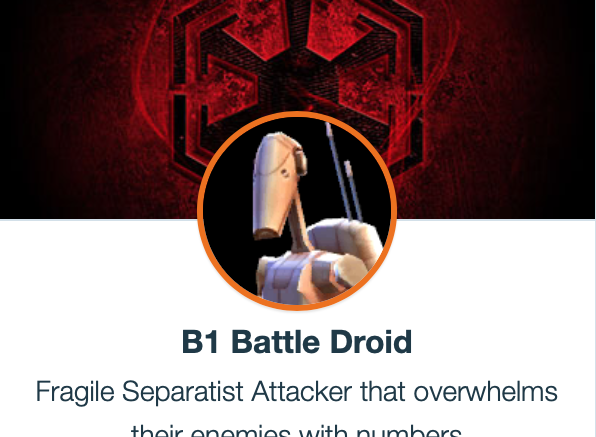 When I first opened the B1 Battle Droid, it was hard to get past my pre-concieved notion that B1 Droids were weak and basically placed on the battlefield for non-human slaughter. Watching the Prequels and The Clone Wars made this difficult to get past since they all have basically the same “Roger, Roger” voice and no personality, and they die every 30 seconds. But as I continued to build the character up in my own game his value grew and grew. While the B1 is great on a Separatist Droid team in the Grand Arena Championships and Territory Wars, with the addition of the Geonosis: Separatist Might Dark Side Territory Battle, the B1’s value has never been higher. Thanks to a recent video from Operation Metaverse, I learned that B1’s offensive stats get ones of the biggest boosts in the game when advanced to Gear 13, so I decided to trust this reputable YouTube channel and fellow former SWGoH GameChanger and gear him up.

While the move to Gear 13 has certainly been a very wise one, not fully understanding characters can be the downfall of any player. I spend a lot of my own time understanding character kits for the site and my own gameplay, but today we are going to break down the Droid Battalion Unique for B1 to better understand how these stacks work, and how they can help you in Territory Battles or other game modes.

Here is how the Droid Battalion unique reads in-game at Level 8 (with a Zeta):

Droid Battalion: Each stack grants B1 +2% Offense and all Separatist allies +0.5% Tenacity and Critical Avoidance

Breaking this down, the Zeta for the B1 Battle Droid is a must. If not for the added survivability alone, the line at the end that reads “Each stack grants B1 +2% Offense and all Separatist allies +0.5% Tenacity and Critical Avoidance” is huge. Thus, more stacks of the Droid Battalion not only means more Offense for the B1, but his Separatist allies then gain up to 50% Tenacity and 50% Critical Avoidance.

In the Geonosis Territory Battles what I wanted to better understand was the mechanics behind the stacks of Droid Battalion and how they increase, as I remember the -8 for each time damaged. So every time the B1 attacks he gains +3 stacks of Droid Battalion which can obviously increase to well above 100 total. While this is nice for added survivability, easily lost in all of this is once again “Each stack grants B1 +2% Offense and all Separatist allies +0.5% Tenacity and Critical Avoidance.” Thus, if you can keep your enemies attacking other Separatist characters, IG-100 MagnaGuard in particular, this will allow your B1 to gain even more Offense and supply his Separatist teammates with even more Tenacity and Crit Avoidance. Coupled with the right mods on the B1 Battle Droid and you can really have him hitting hard.

One additional note, on B1 Battle Droid’s Blast Them! AoE special attack he also gains 1 stack of Droid Battalion for each other Separatist ally, so this gives you one more opportunity to stack these above 100 and gain more Offense, Tenacity and Crit Avoidance.

Separatist Droid Gameplay Strategy Tip: Whenever my B1’s turn is up and the Blast Them! AoE attack is an option I always use it and select the ally who is the lowest health/protection, typically the IG-100 MagnaGuard. This ability actually grants that selected ally 0.5% Health and 0.5% Protection for each stack of Droid Battalion on the B1, so again, you can regain 50% Health and 50% Protection (or more) when used this way. So if you keep the MagnaGuard taunting and B1 keeps replenishing his health/protection you’re setting up your Separatists for some crazy high stat increases.

I hope this helps you in your gameplay using the Separatist Droids. I know that by breaking down this kit, one I have reviewed multiple times before, it has helped me better understand how I can use the B1 and other Separatist Droids and it is my hope that is helps educate you a bit as well.