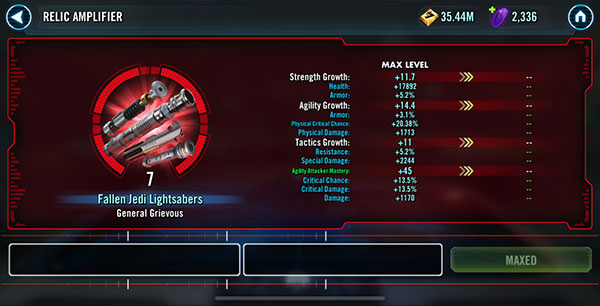 For the first entry in a series where we take a closer look at Relics for individual characters, the character topic of this will be General Grievous. Each post will compare a character’s usefulness and viability with the stat boosts they gain from a Level 7 Relic.

General Grievous has two primary uses, leading a Separatist Droid team and being put under an IG-88 lead with Zeta T3-M4 to counter Sith Empire teams. In either case, there are a few key stats that get significant boosts from a Level 7 General Grievous Relic.

These numbers compare a Level 0 relic to a level 7 Relic for General Grievous. His base Health goes from 58,863 to 76,755, an increase of 17,892. This greatly increases his damage because all of his attacks are based on his Max Health instead of his Physical Damage number, so when couple with the best mods for General Grievous, you can turn him into a monster. His Armor sees a 12.23% increase, going from 34.71% to 46.94%. His Resistance sees a smaller increase of 6.64%, going from 29.51% to 36.15%. Another notable stat is his Critical Damage, increasing by 13.5%. The most notable stat increase by far, however, is Critical Chance. A Level 7 relic gives Grievous a 33.92% increase to his Critical Chance, taking it from 40.98% to 74.5%. With how high Grievous’s damage potential is, you want him critting as much as he can (especially under an IG-88 lead against a Darth Revan team). As an added bonus, these stats are all included in the base stats so they will be factored in before mods.

Considering Grievous’s overall viability and what his Relic adds, I give this relic an A+.

Be the first to comment on "SWGoH Relic Review: General Grievous"