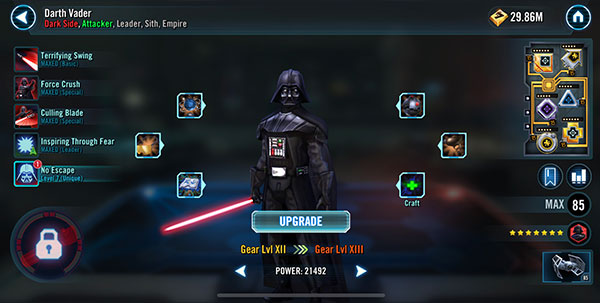 Continuing the Relic Review series, we take a look at Darth Vader’s Relic upgrades and the impact it has on the game. As always these reviews compare a character at Gear 13, Relic Level 0 with Relic Level 7, and mods are not factored in.

For Darth Vader, his Lightsaber is his Relic of choice in SWGoH. His statistics impacted include Health, Physical & Special Damage, Armor, Resistance, Physical Critical Chance and finally Resistance & Armor Penetration as well as Physical Accuracy from his Mastery.

Defensively, Darth Vader gets a very nice Health boost of 19,746 which is tied for the 14th highest increase in the game. Given all characters except for the Top 13 get between 16,812 and 19,746 this is not a huge advantage over the field, but it is a nice gain nonetheless. While Vader does not gain any Protection, he does receive a 9.58% increase in Armor and a 6.57% increase in Resistance. Both of those gains are in the bottom third of the SWGoH lineup comparatively speaking. This rounds out his defensive gains as Vader does not gain any Deflection or Dodge Chance, nor does he add any Physical or Critical Avoidance.

On the offensive side, Darth Vader is a dealer of Physical Damage and sees and increase of 2,706 damage, one of the highest damage increases gained by a Relic upgrade. Special Damage can be ignored as we look now at Physical Critical Chance, which increases by 18% to 55.67% CC overall. A 13.5% increase in Accuracy is a nice addition, as are a +90 Resistance Penetration and +90 Armor Penetration.

As we look at Darth Vader’s place in today’s SWGoH, he vaulted from the upper middle class of the game, to near the top after his Father’s Day rework in 2020, and his Relic only strengthens his new Merciless Massacre ability. With the proper mods on Vader, he is now part of the main FTP counter to the Galactic Legends Rey and Supreme Leader Kylo Ren, and his ship is made stronger by the TIE Bomber as well. In addition, the rework changed the view on the Assault Battle: Forest Moon which is far easier with a Relic Darth Vader included in the lineup.

The most iconic character of the Star Wars franchise, Darth Vader has once again been boosted to his appropriate status in SWGoH by Capital Games in my opinion. Because of the items mentioned above, thanks mostly to the rework in June 2020, I am rating Darth Vader’s Relic as a High Priority as there are now few other characters that I will be prioritizing before this Sith Lord.

SWGoH: Things You Should Know Before You Zeta Darth Maul

Be the first to comment on "SWGoH Relic Review: Darth Vader"