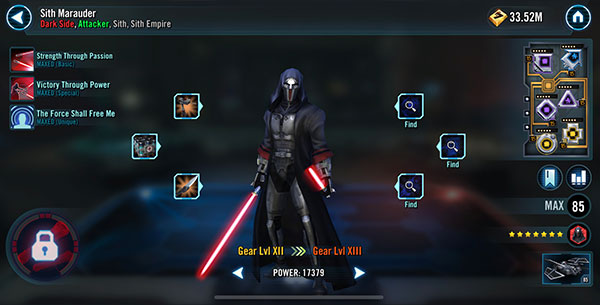 Gaming-fans.com has been a staple in the Star Wars Galaxy of Heroes community since the beginning. From our Mod Guides and breaking news as a EA GameChanger to our Sith Raid Guide and more, our site looks to help educate players about this highly complex mobile game. With Relic Amplifiers now in the game, Gaming-fans.com has you covered as we seek to continue to make the community smarter when it comes to how to get the most out of Start Wars Galaxy of Heroes.

Continuing the Relic Review series, we take a look at Sith Marauder’s Relic upgrades and the impact it has on the game. As always these reviews compare a character at Gear 13, Relic Level 0 with Relic Level 7, and mods are not factored in.

For Sith Marauder, his Lightsabers are his Relic of choice in SWGoH. His statistics impacted include Health, Physical & Special Damage, Armor, Resistance, Physical Critical Chance and finally Resistance & Armor Penetration as well as Physical and Special Accuracy from his Mastery.

Defensively, Sith Marauder gets a very nice Health boost of 19,746 which is tied for the 14th highest increase in the game. Given all characters except for the Top 13 get between 16,812 and 19,746 this is not a huge advantage over the field, but it is a nice gain nonetheless. While Sith Marauder does not gain any Protection, he does receive a solid 12.29% increase in Armor and the 8th highest Resistance increase in SWGoH from Relics with +11.18%. Comparatively speaking, these are fantastic gains to drastically improve his survivability. This rounds out the defensive side as Sith Marauder does not gain any Deflection or Dodge Chance, nor does he add any Physical or Critical Avoidance.

On the offensive side, Sith Marauder is a dealer of Physical Damage and sees and increase of 2,706 damage, one of the highest damage increases gained by a Relic upgrade. Looking at Physical Critical Chance, he gains 17.96% CC to bring his maxed out total to 63.33%. A 13.5% increase in Accuracy is a nice addition, but the +90 Resistance Penetration and +90 Armor Penetration are key stats. The +90 Armor Penetration brings him to a total of 270 AP overall, the 19th highest AP in the game (after Relic upgrades) and just slightly ahead of Darth Vader and slightly below Jedi Knight Anakin. Note that because he only deals Physical Damage, his gains in Special Damage and Special Accuracy are not relevant.

As we look at Sith Marauder’s place in today’s SWGoH, this is where things get interesting. While it seems the Sith Empire META is indeed shifting, the reality is that the Darth Revan & Darth Malak Sith Empire teams remain top-tier in Galaxy of Heroes. Sith Marauder is typically 6th or 7th on most players’ Sith Empire list of importance, but he gained significant attention just before the introduction of Relics to the game due to his offensive capabilities. With a now highly enhanced kit from the Relic upgrades, he is clearly one of the top offensive character in today’s SWGoH. Add in the fact that he has an oft-overlooked ship and his value increases, especially since that ship would certainly help most anyone fighting the Geonosis: Separatist Might Territory Battles where very strong Dark Side ships are needed.

Because of the items mentioned above I am rating Sith Marauder’s Relic as a High Priority. While there are several characters that I will be prioritizing before Sith Marauder, his gains are very strong and his value right now is extremely high.