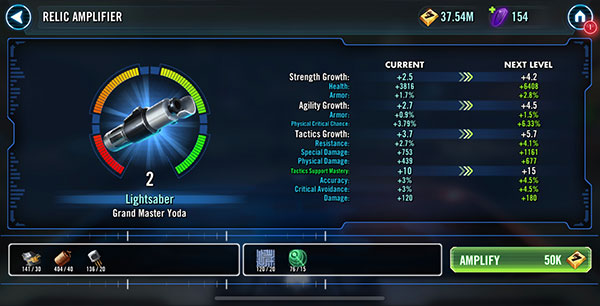 Continuing our SWGoH Relic Review series, this article takes a look at Grand Master Yoda and his green lightsaber. As always, these reviews compare a character at Gear 13 with Relic level 0 to Relic level 7, and mods are not factored in.

First off, Yoda’s below average Health increase of 16,830 increases his Max Health pool to 50,583. Because Yoda is the definition of a glass cannon, the middle of the road increases to his Armor and Resistance, 12.05% and 10.3% respectively, are more beneficial than they are for most characters. These durability improvements pair well with the 13.5% increases Yoda sees to his Special Critical Avoidance and Physical Critical Avoidance.

The most significant stat boost for Grand Master Yoda is the 3,336 jump in his Special Damage, bringing his total to 7,828. Unfortunately, he doesn’t gain any increases to his Special Critical Chance which remains at a lowly 22.92%. Luckily, under Jedi Knight Revan’s lead, Yoda’s offense and crit chance can increase by as much as 45% each, making it much easier to take advantage of the significant Special Damage gain from Yoda’s relic. Factoring in the Turn Meter gain built into his kit, Yoda has very high offensive potential with a high level Relic. Note that because Grand Master Yoda only deals Special Damage, so the increases to his Physical Damage and Physical Critical Chance will be ignored.

While most of the stat improvements from his Relic are fairly average, Grand Master Yoda can be the engine keeping either a Padme or Jedi Knight Revan team running and his value will only increase with the light side map of Geonosis Territory Battles coming soon. Counting all these factors, Grand Master Yoda’s Relic is around the middle of the High Priority group for me. He isn’t at the top of the list but his Relic is certainly a good investment.