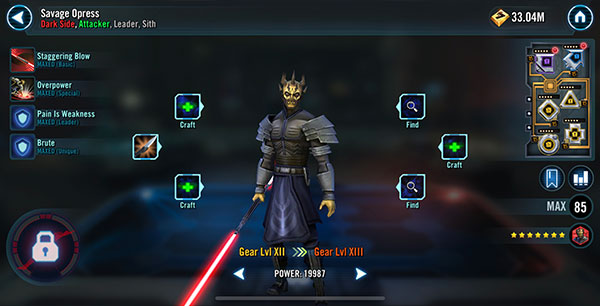 Continuing the Relic Review series, we take a look at the Relic for Savage Opress, his Double-Bladed Lightsaber, and the impact it has on the game and his stats. As always these reviews compare a character at Gear 13, Relic Level 0 with Relic Level 7, and mods are not factored in. The stats mentioned are based off of the data provided by the fine people at swgoh.gg.

Looking at the survivability and defensive stats, Savage gets a very nice Health boost of 19,728 which is one of the higher Relic increases. Given all characters except for the Top 13 get between 16,812 and 19,746 this is not a huge advantage over the field, but it is a nice gain nonetheless. Since Savage Opress works well with a higher Health stat from the numerous Heal Over Time buffs he generates from his Brute unique and has a base Health Steal of 25% at Gear 13, this is a stat I was specifically looking out for. No Protection is gained from his Relic, however his Armor increase of 10.99% is below average comparatively speaking while his Resistance increase of 9.79% is above average across all Relic gains. There are no Dodge or Deflection Chance gains nor Critical Avoidance from a Relic 7 upgrade for Savage.

On the offensive side of things, Savage Opress deals Physical Damage, so his Special Damage & Special Accuracy gains do not help him at all. However he does get a boost of 2,704 to his Physical Damage which is a very nice gain to help him hit harder. To make that even more effective is a nearly 18% gain in Physical Critical Chance bringing a Level 7 Relic Savage to 66.58% CC overall. Finally, his Mastery boosts his Resistance & Armor Penetration stats to respectable levels.

Once part of the Darth Maul Sith META, Savage Opress today just does not have a solid, important place in Galaxy of Heroes. Of course that can always change given we still expect additional Clone Wars content, but I just do not see Savage getting back to the top of the Arena mountain like he once was. I personally use him in the Grand Arena at times on Sith teams, but usually only when I do not feel 100% comfortable having the Sith Triumvirate take on a team of five by themselves. Unfortunately for Savage Opress fans, the upgrade to Relic Level 7 just does not look like a great investment compared to the field. With no ship, a lower value in today’s game and average stat gains, I am giving Savage Opress’ Relic a Low Priority grade.

SWGoH GameChangers: The Month of the Sith? New Sith Character to be Added