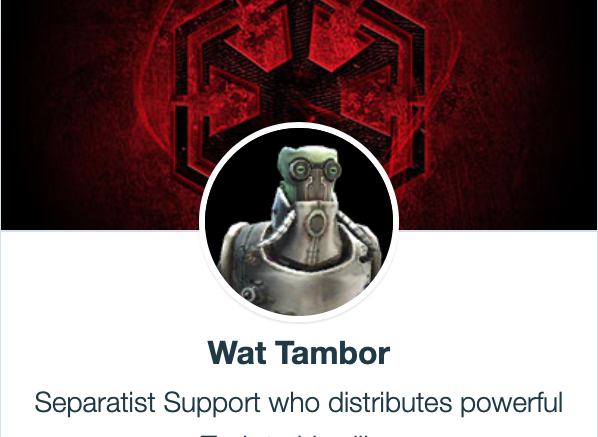 Welcome to another article in a series about Star Wars Galaxy of Heroes where we take a look at the best mods for SWGoH characters. While I do not claim to have all of the answers in this game, I do my research and have used every toon I write about extensively. These are mod recommendations based on the character’s kit and actual gameplay to help you in your quest to dominate the Galaxy of Heroes holotables. 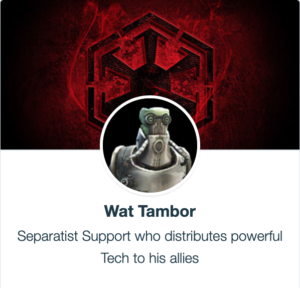 Wat Tambor “was a male Skakoan who was the foreman of the Techno Union and an executive of Baktoid Armor Workshop. During the Separatist Crisis, he pledged the Techno Union’s resources to the Confederacy of Independent Systems, earning himself a seat on the Separatist Council during the Clone Wars,” according to Wookieepedia. Added to Galaxy of Heroes as the character you compete for shards of in the Geonosis: Separatist Might Territory Battle event, Tambor’s uses in the game continue to evolve. Let’s take a look at what mod stats you should focus on to get the most out of Wat Tambor in SWGoH.

Main Focus: Speed. I am going to stick with Speed as the main focus for a couple of reasons. First off, his ability to support his allies while not actually attacking rivals those of C-3PO and Hermit Yoda, so you want him taking turns early and often. Secondly, his maxed out Speed is the 4th highest you find in SWGoH at 186 meaning that 15% Speed boost from a set of four Speed mods goes farther with him than almost all others, so enhance the strength to make him harder to deal with.

Additional Areas to Focus: Health, Potency, Tenacity and any additional survivability. Wat Tambor has a kit built around Health – he dishes out Heal Over Time buffs and his Overseer unique ability grants all Separatists and Dark Side Droid allies Max Protection equal to 30% of Wat’s Max Health, so if you use him with those factions beef up his Health bigtime. In addition, he gains nearly 17k Health from his Relic upgrade, and while the stat increases from taking him to Gear 13 are nice, Wat Tambor’s Relic upgrade stats are not impressive. Potency is going to help his basic when he attacks out of turn as it can land a Damage Over Time and remove Turn Meter. Tenacity is a good choice to keep Wat Tambor from getting ability blocked, given his strong kit. Finally survivability is already built into these recommendations in the form of Health, but added Protection and Defense are also good investments. You want Wat Tambor alive to grant the Tech buffs, so make him harder to kill to be more effective.

In-game Mod Recommendations: Speed & Tenacity. Given how important Health is to Wat Tambor’s kit, it seems odd to not have Health included. Whether you shoot for a Tenacity or Potency set or focus the plus mod on one of these stats, Health has to be a major focus.

Wat Tambor is one of those SWGoH toons who using Speed mods is likely the best strategy since his base Speed is so high. I am suggesting a set of 4 Speed mods and a set of 2 Health/Tenacity/Potency mods based on your mod inventory – here is my recommended mod setup for Wat Tambor: