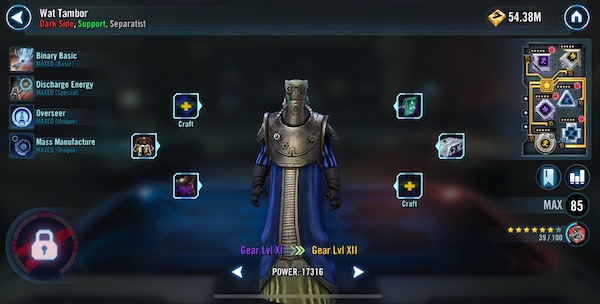 Continuing the Relic Review series, this article will take a look at Wat Tambor and his Relic, a Tech Control Module. As always these reviews compare a character at Relic level 0 to Relic level 7 and mods are not factored in. Because Wat does not deal damage, I will ignore all of his offensive stat gains in this article.

First off, Wat Tambor gains a useful Health increase of 16,830. While this is not high compared to the gains of other SWGoH characters, it is a stat that benefits his kit greatly nonetheless. Unfortunately his Armor and Resistance increases are very low; 6.43% and 4.4% respectively. Finally Wat gains a 13.5% boost to both Physical Critical Avoidance and Special Critical Avoidance.

While Wat Tambor is an incredibly valuable and versatile character, the stat gains from his Relic are very, very disappointing. While I do intend to take Wat to Gear 13 on my own account because of the stats from his finisher, I have to rank Wat Tambor’s Relic upgrade as a very Low Priority.