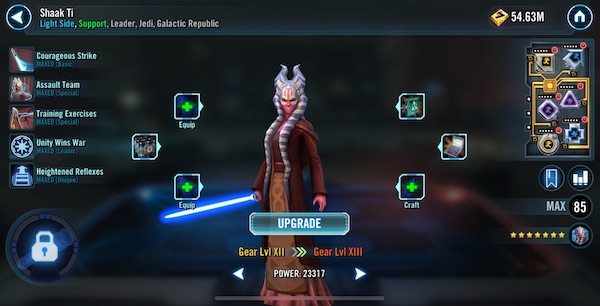 Continuing the Relic Review series, this article will take a look at Shaak Ti and her Relic, a lightsaber. As always these reviews compare a character at Relic level 0 to Relic level 7 and mods are not factored in.

To start off Shaak gains a slightly better than the field Health increase of 19,422. Her 10.72% Armor increase and 9.64% Resistance increase are highly both useful middle of the road gains. In addition she gains a very valuable 15.75% increase to both Dodge Chance and Deflection Chance.

Shaak Ti has a lot of value and versatility in Star Wars Galaxy of Heroes being able to slot into several lineups with Jedi, Clones, or other Galactic Republic characters or lead her own team. In addition she will be a key character on the new Republic Offensive Territory Battle map and we know she will be required to earn Ki-Adi-Mundi shards (with a 23k GP requirement for the mission). Shaak Ti’s overall value in the game today, plus the fairly useful stat gains from her Relic, put her in the middle area of the High Priority tier.