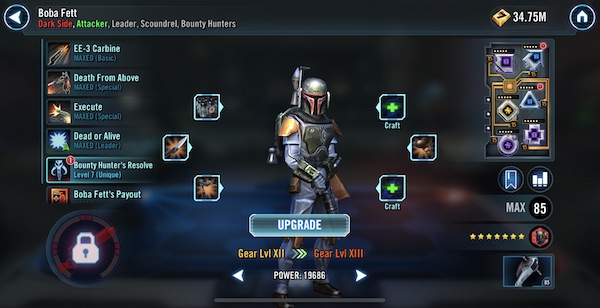 In another addition to the Relic Review series, this article will take a look at Boba Fett and his Relic, the EE-3 Blaster Rifle. As always these reviews compare a character at Relic level 0 to Relic level 7 and mods are not factored in.

While the Health increase of 17,892 is slightly below average, Boba Fett will revive at least once with the potential to revive multiple times. This greatly increases the value of his Health increase as a result. In addition his 13.44% Armor and 7.82% Resistance increases are both respectable numbers.

While not close to being a meta team, Bounty Hunters are a very useful team to have built up and Boba Fett is a core member on any Bounty Hunter lineup. In addition the stat increases from his Relic help him quite a lot and are very useful overall. I am placing Boba Fett and his relic at the lower end of the High Priority tier.