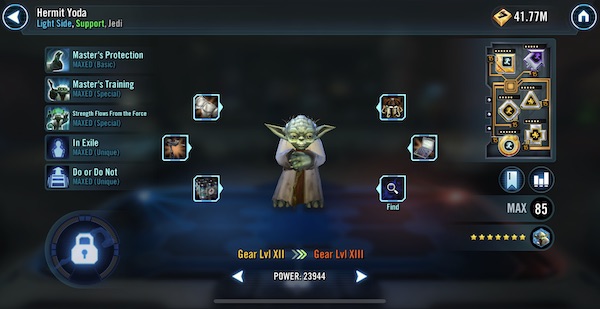 Gaming-fans.com has been a staple in the Star Wars Galaxy of Heroes community since the beginning. From our character Mod Guides and breaking news as a EA GameChanger to our Sith Raid Guide and more, our site seeks to help educate players about this highly complex mobile game. With Relic Amplifiers now in the game, Gaming-fans.com has you covered with our the Relic Review series, as we seek to continue to make the community smarter when it comes to how to get the most out of Start Wars Galaxy of Heroes.

Continuing the Relic Review series, we take a look at Hermit Yoda’s Gimer Stick Relic upgrades and the impact these upgrades have on the game. As always these reviews compare a character at Gear 13, Relic Level 0 with Relic Level 7, and mods are not factored in.

Defensively, Hermit Yoda sees a Health boost of 16,812 bringing him to 61,909. While this adds to his already strong Health stat, the gain is tied for the lowest in the game with 12 other characters. His defensive Armor stat gets a 8.29% increase with a 5.43% gain in Resistance, both near the bottom of the pack. While one could argue that Hermit Yoda was added to the game in a time where his stats were already stronger than many in the game, these increases leave a lot to be desired given the cost of the items needed to advance Relics in SWGoH. While only about 20-25% of all characters in SWGoH see any changes in their Physical and Critical Avoidance, Hermit Yoda is one of those few, gaining 13.5% for both stats to add to his survivability in battle.

While Hermit Yoda’s value in SWGoH has fluctuated greatly over time, he continues to be a very useful character for those who have him. The problem with the stats above is that the developers made his Relic upgrades quite underwhelming. Like the use of specific Gear 12 items, the increases to many of these stats are completely useless and if I am being completely honest, it feels like the devs were a bit lazy when adding in his Relic categories. Additional Health and any Dodge or Deflection chance would have made this Relic more sought-after, but it appears that they missed a chance to enhance this character without making him OP.

In today’s game, I feel that Hermit Yoda has significant value in the Geonosis: Republic Offensive game mode on the Jedi-specific missions, as indicated in my walkthrough of the Phase 2 Jedi Combat Mission with Jedi Knight Revan. Overall though, I am quite disappointed with the lack of gains for one of my favorite characters in the Star Wars universe. However, because of the mechanics of the JKR team with Jolee Bindo and Hermit Yoda’s high evasion I have to give his Relic upgrades a grade of Middle to Low Priority as I will likely get him to Gear 13 and then leave his Relic upgrades alone.

Be the first to comment on "SWGoH Relic Review: Hermit Yoda"