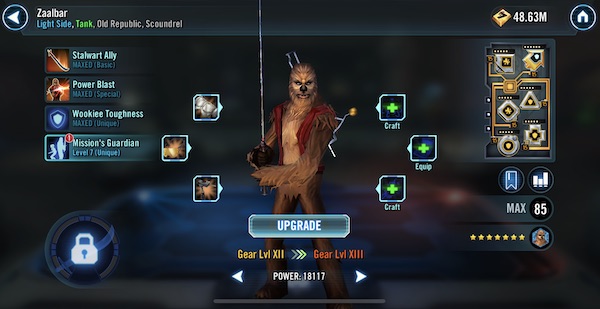 Continuing the Relic Review series, this article will look at Zaalbar and his Relic, the Ceremonial Blade. As always these reviews compare a character at Relic level 0 to Relic level 7 and mods are not factored in.

Starting off Zaalbar gains a very solid 19,728 Health increase. While his 13.14% Armor increase is very useful, the 4.09% bump to Resistance is extremely disappointing. In addition he sees a rare Protection increase of 9,900.

On the offensive side Zaalbar’s Physical Damage increase of 1,534 is a bit below average. However, he sees a 15.58% boost to Physical Critical Chance and a 6.75% Health Steal bump. Because Zaalbar only deals Physical Damage, the increase to his Special Damage can be ignored.

Zaalbar is an excellent tank in both Scoundrel and Old Republic teams, especially when paired with Mission Vao. However the stat increases from his Relic are not very notable. Factoring all of these items in, I am placing Zaalbar in the lower end of the Medium Priority tier.