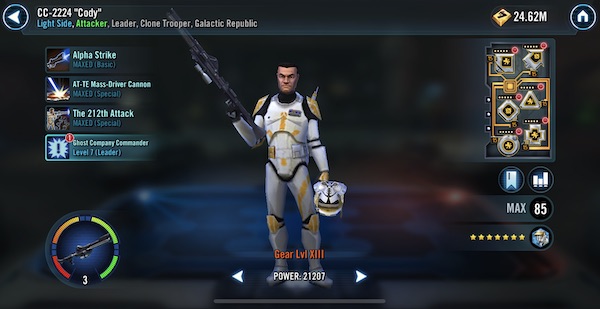 Continuing the Relic Review series, this article will look at CC-2224 “Cody” and his Relic, the DC-15 Blaster Rifle. As always these reviews compare a character at Relic level 0 to Relic level 7 and mods are not factored in.

To start off Cody gains a slightly below average Health increase of 17,910. His impressive Armor and Reistance increases, 14.65% and 9.09% respectively, make up for this however.

While the stat increase from his Relic are very good, Cody has limited usefulness and viability in the game and I don’t see that changing unless the Clone Trooper faction receives multiple new additions. The main reason to gear Cody would be because he is required in a Phase 2 Special Mission on the new Geonosis Light Side Territory Battle map that rewards Mk2 GEC. Because of these factors I am placing him in the lower end of the Medium Priority tier.