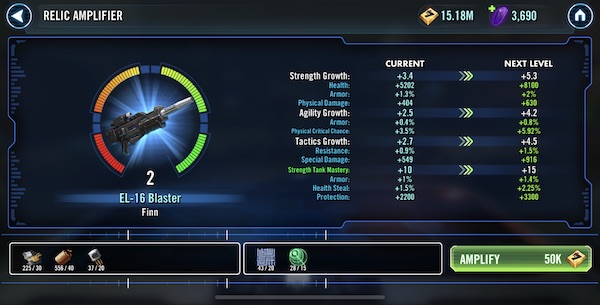 In another edition to the Relic Review series, this article will take a look at Finn and his Relic, the EL-16
Blaster. As always these reviews compare a character at Relic level 0 to Relic level 7 and mods are not factored in.

First, Finn gains a strong Health increase of 19,728. While his 11.31% Armor increase is very useful, the 4.31% Resistance increase is disappointing. He is also one of the rare tank characters in SWGoH who gains and additional 9,900 Protection.

Finn gains a 1,534 Physical Damage along with a 15.58% Physical Critical Chance boost. Finally, he sees a 6.75% bump to Health Steal. Because Finn only deals Physical Damage, the increase to his Special Damage can be ignored

Overall the stat increases from Finn’s Relic are about average – not much seems notable about them. Finn is an excellent tank on a Resistance team and now known to be required to be at Relic level 5 to unlock Galactic Legend Rey, so his value is as high as ever now. Note that his role as a Tank in SWGoH is why his stat increases are what they are. While he has been used in more of an attacker’s role in the past, it is clear from these stat increases that he is to be used in his initial role as a Tank once upgraded. Because of all of these factors, the requirements for Galactic Legend Rey most notable, I am placing him around the middle of the High Priority tier. If you disregard Finn being needed for Rey, he fits more in the middle area of the Medium Priority tier.