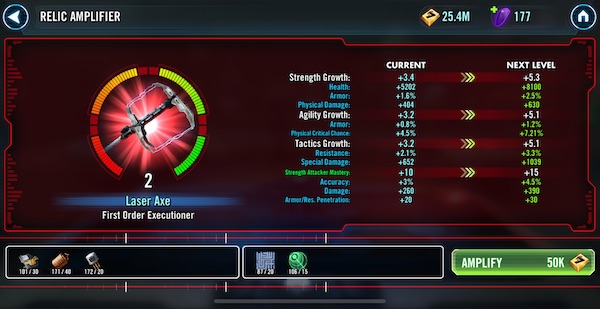 Continuing the Relic Review series, this article will take a look at First Order Executioner, also known as either FOE or FOX, and his Relic – the Laser Axe. As always these reviews compare a character at Relic level 0 to Relic level 7 and mods are not factored in.

Starting off FOX gains a large Health increase of 19,746. He also sees a solid increase to both Armor and Resistance, 10.57% and 9.18% respectively.

On the offensive side his 2,706 Physical Damage increase is quite notable. He also receives an 18% Physical Critical Chance increase and an increase of 90 to both Armor Penetration and Resistance Penetration. Finally he gains an additional 13.5% Physical Accuracy. Because First Order Executioner only deals Physical Damage, the increases to his Special Damage and Special Accuracy can be ignored.

Fox is an excellent addition to a First Order team, providing high damage and Turn Meter gain for his allies. All three of his abilities allow him to increase his Max Health and he gains additional Offense based on 5% of his Max Health. These two mechanics greatly increase the value of his Relic that is already strong in other areas. Overall Fox belongs in the lower end of the High Priority tier but when you consider that he is required for the Galactic Legend event to open the new Kylo Ren, he is bumped up to the middle area of the High Priority tier.