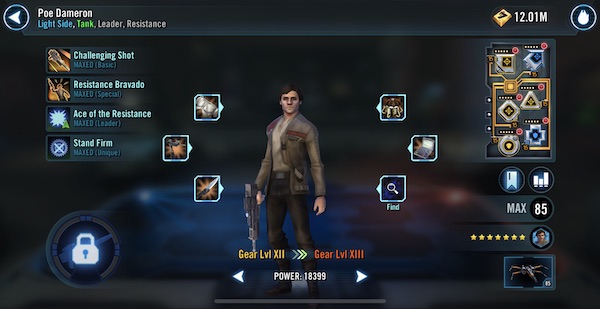 Continuing the SWGoH Relic Review series, this article will look at Poe Dameron and his Relic, the EL-16 Blaster. As always these reviews compare a character at Relic level 0 to Relic level 7 and mods are not factored in.

Starting off Poe gains an above average Health increase of 24,822. However both his Armor and Resistance increases are underwhelming, 9.37% and 5.11% respectively. Filling the role as a tank, he also gains a 9,900 Protection boost. The 15.75% increase to Dodge Chance and Deflection Chance are quite useful in adding to his survivability stats.

On the offensive side Poe only gains two stat increases. The first is a small Physical Damage increase of 1,512, with the second being a useful 18% Physical Critical Chance increase.

Most of the stat increases from Poe’s Relic are either very good or very disappointing with little in between. In addition this is a character with very little usability in any game modes. Because of these factors I am placing Poe Dameron in the upper end of the Low Priority tier. However, he does have a ship and is a required character to unlock Galactic Legend Rey. If this is important to you, this moves Poe to the middle area of the High Priority tier.