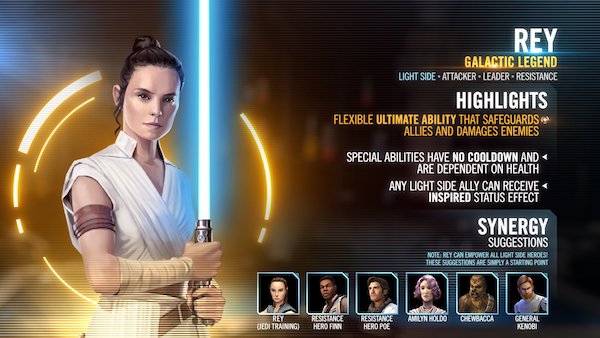 Capital Games has released the kit and their Developer Insights on one of their two Galactic Legend characters, beginning with Rey. These are listed below along with links to the full text from the EA SWGoH forums:

Basic: RELENTLESS PURSUIT
FINAL TEXT: (ZETA) Deal Physical damage to target enemy. If it’s Rey’s turn, she deals damage a second time, has +50% Health Steal, and ignores 50% of the target’s Armor. This Health Steal is doubled while Rey is under 50% Health.

Leader: WISDOM OF THE SACRED TEXTS
FINAL TEXT: (ZETA) Light Side allies have +40% Mastery, +30 Speed, and +30% Max Health. Whenever an enemy gains bonus Turn Meter, Inspired Light Side allies gain 5% Mastery (stacking) until the end of the encounter. The first time each Light Side ally falls below 50% Health, they gain Damage Immunity for 1 turn, which can’t be copied, dispelled, or prevented, and recover 50% Health when it expires.

Unique 1: MANIFEST INSPIRATION
FINAL TEXT: (ZETA) At the start of her turn, Rey becomes Inspired. If she is already Inspired, she instead Inspires the healthiest Light Side ally who isn’t. Inspired Light Side allies dispel all debuffs on themselves when they use a Basic ability during their turn. Light Side allies with Inspired or Damage Immunity can’t have their Turn Meter reduced.

Ultimate: HEIR TO THE JEDI (Must charge to 100% before use)
Unlocked with purchase (10 Ultimate Ability Materials) after meeting requirement of Relic Amplifier level 1
Ultimate Charge: Rey gains 6% Ultimate Charge at the start of every character’s turn.

FINAL TEXT: (ULTIMATE) Until the end of Rey’s next turn, she enters a defensive stance and damage Light Side allies receive is reduced to 1. While in this stance, Rey can’t act, has 30% less Speed, is immune to all detrimental effects, and can’t be defeated. Upon activating this ability again, she deals true damage (ignores defense, but can’t critically hit) to the enemy team split among them and all Ultimate Charge is consumed. This attack can’t be countered or evaded.

Now a bit of the Developer Insight into the new Rey: