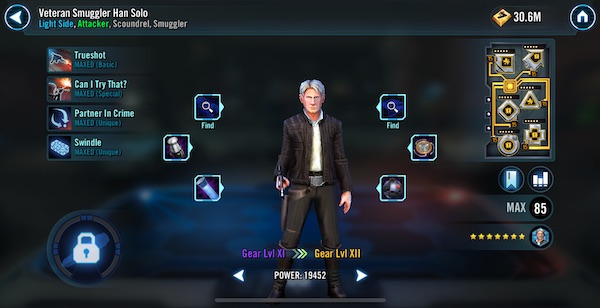 Continuing the Relic Review series, this article will take a look at Veteran Smuggler Han Solo and his Relic, the Remote Detonator. As always these reviews compare a character at Relic level 0 to Relic level 7 and mods are not factored in.

Defensively, Veteran Smuggler Han Solo gains an average Health increase of 17,892. He also receives a very high 13.32% Armor increase and a respectable 7.04% Resistance boost, but this rounds out his survivability gains.

On the offensive side VS Han gains a large 2,884 Physical Damage increase. In addition he sees a 13.5% Critical Damage bump. Finally, he gains a 33.92% Physical Critical Chance increase which allows his base Critical Chance to pass 100% when you factor in his unique Swindle. Unless the target has extra Crit Avoidance, VS Han would be guaranteed to critically hit on every attack.

Veteran Smuggler Han Solo gains very good stat increases from his Relic, and while he has very little usage, the main problem has been a lack of synergy. Now that his interesting kit has been touched up and updated with the Resistance tag, I expect VS Han to be a much more useful character. While his updated kit is not live, I estimate that his Relic upgrade will now be in the upper end of the Medium Priority tier. However, being required to unlock Galactic Legend Kylo moves him to the middle area of the High Priority tier (assuming that is important to you) whether Vet Han becomes more useful or not.

Be the first to comment on "SWGoH Relic Review: Veteran Smuggler Han Solo"