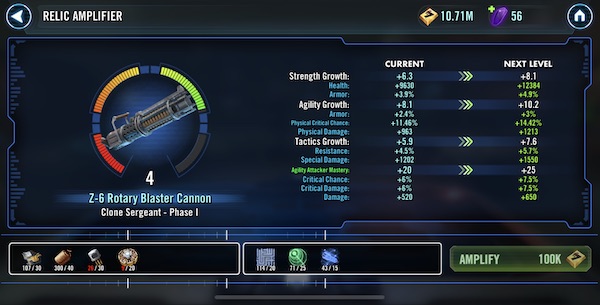 In another edition to the Relic Review series, this article will look at Clone Sergeant – Phase 1 and his Relic, the Z-6 Rotary Blaster Cannon. As always these reviews compare a character at Relic level 0 to Relic level 7 and mods are not factored in.

Starting with survivability, Clone Sergeant – Phase 1 gains an average Health increase of 17,910. His Armor and Resistance increases are both very high, 13.21% and 8.97% respectively.

On the offensive side Sarg gains a strong Physical Damage boost of 2,884. He also gains an impressive 33.92% Physical Critical Chance increase, taking his final base stat to 87.67%. Finally, he gains a 13.5% Critical Damage bump.

Clone Sergeant – Phase 1 gains very good stat increases from his Relic considering he is an attacker. Unfortunately, Sarg’s kit is quite outdated and he has very little viability. While he is needed in a single special mission in the Light Side Geo Territory Battle to earn additional mk2 GEC, he is rarely used anywhere else. Because of his low usability, I am putting him in the lower end of the Medium Priority tier.