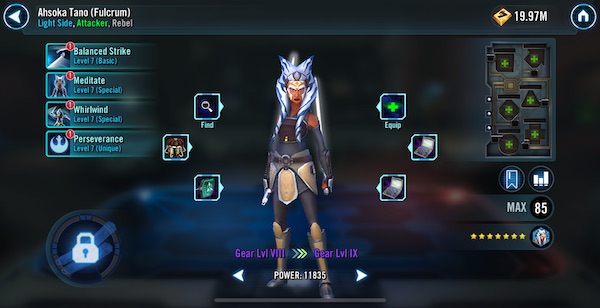 In another edition to the Relic Review series, this article will look at Ahsoka Tano (Fulcrum) and her Relic, a pair of Lightsabers. As always these reviews compare a character at Relic level 0 to Relic level 7 and mods are not factored in.

Starting off Ahsoka gains an average Health increase of 17,892. Her Armor and Resistance increases are both very strong, 13.14% and 8.59% respectively.

On the offensive side Ahsoka gains an impressive Physical Damage increase of 2,884. She also recieves a large 33.92% Physical Critical Chance boost and a 13.5% Critical Damage bump.

The stat increases from Ahsoka Tano (Fulcrum)’s Relic are very good and complement her well as an Attacker. However, her overall usability is fairly low and while she does have the Rebel tag, her damage is unnecessary on a team that has Han Solo, Chewbacca, and Commander Luke Skywalker. This pains me to say as Ahsoka is one of my favorite characters in the Star Wars Universe, but her Relic belongs in the middle to low area of the Medium Priority tier.

Be the first to comment on "SWGoH Relic Review: Ahsoka Tano (Fulcrum)"