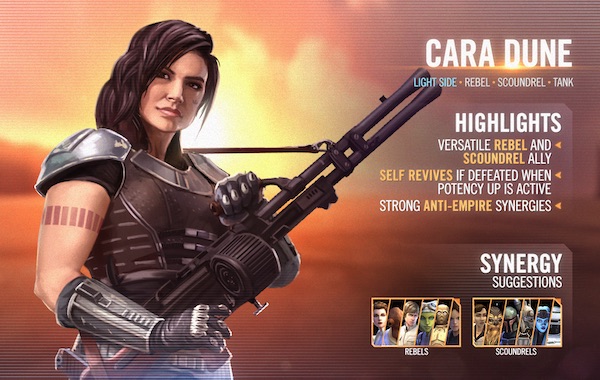 In another entry to the Relic Review series, we will look at Cara Dune and her Relic, Cara Dune’s Blaster Rifle. As always these reviews compare a character at Relic level 0 to Relic level 7 and mods are not factored in.

Starting off Cara Dune gains a solid Health increase of 19,746. She also gains the largest Armor increase I have ever seen at 17.34% along with an average 7.1% Resistance boost. That Armor gain ends up being the second highest of all SWGoH characters, second only to the Nightsister Acolyte. Cara also gains an additional 9,900 Protection due to her role as a tank in Galaxy of Heroes.

On the offensive side, Cara Dune’s 1,536 Physical Damage increase is a bit underwhelming, but again her role is primarily to be a tank. She also receives an additional 15.58% Physical Critical Chance and a 6.75% Health Steal bump.

While it is difficult to tell the overall viability of a new character before most players have a chance to test them, Cara Dune appears to be a strong tank whose stat increases from her Relic suit her well. In addition, having the Rebel and Scoundrel tags should give her a strong amount of usability. Because of these factors I will be placing her in the upper end of the Medium Priority tier.