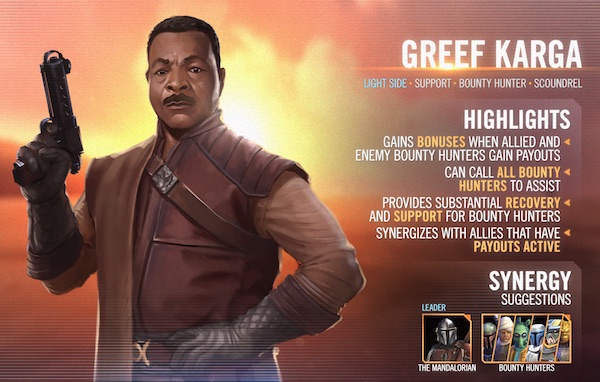 In another entry to the Relic Review series, this article will take a look at Greef Karga and his Relic, the Damaged Beskar Ingot. As always these reviews compare a character at Relic level 0 to Relic level 7 and mods are not factored in.

Greef Karga gains a strong Health increase of 19,440. His 9.89% Armor and 7.36% Resistance increases are both respectable additions to his all-important survivability.

On the offensive side, Greef Karga’s Physical Damage increase of 1,512 is below average but he also gains an additional 18% Physical Critical Chance. In addition he sees a 13.5% boost to Physical Accuracy and a 6.75% Health Steal bump. Finally, Greef gains an increase of 90 to both Armor Penetration and Resistance Penetration.

Greef Karga’s stat increases from him Relic are overall about average. However, initial reports indicate he will be a highly valuable member of any Bounty Hunter team. Unfortunately, because Greef is a Light Side character and all but one of the bounty hunters are Dark Side characters, he is unable to be used on a Bounty Hunter team in Territory Battles. Because of these factors, I am placing him in the upper end of the Medium Priority tier.

Be the first to comment on "SWGoH Relic Review: Greef Karga"