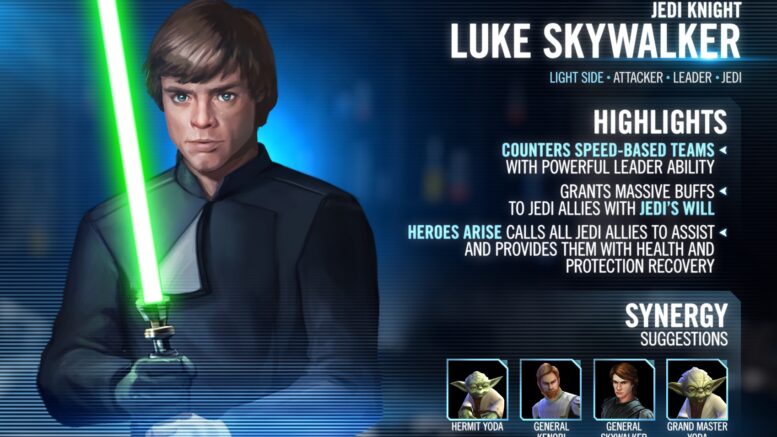 In the newest addition to the Relic Review series, this article will take a look at the iconic Jedi Knight Luke Skywalker and his Relic, the Lightsaber. As always these reviews compare a character at Relic level 0 to Relic level 7 and mods are not factored in.

To start off, Jedi Knight Luke Skywalker gains an average Health increase of 19,746. This brings his Max Health to 68,910, the fourth highest in the game. When you also consider his base Protection of 77,159, the highest in the game, Luke will be extremely durable as a result. He also receives strong increases to both Armor and Resistance, 8.06% and 9.56% respectively. His base Armor ends at 56.5% which puts him in the top 10% of characters in terms of Armor stats.

On the offensive side, Jedi Knight Luke Skywalker gains a large 2,705 Physical Damage increase, bringing his total to 7,867 which is the highest in the game. He also gains an 18% Physical Critical Chance increase as well as a 13.5% Physical Accuracy boost. Finally, he gains an additional 90 Armor Penetration and Resistance Penetration.

While I focused on overall stats more than usual, it was because I wanted to emphasize the exceptional stats Jedi Knight Luke Skywalker’s Relic was building up to. Not only is he highly durable, but Luke also will be a source of extreme firepower when you consider his incredibly high base damage and the fact he can increase his offense and ignore defense. Luke has broad Jedi synergy and can greatly increase the faction’s viability, similar to what Jedi Knight Revan can do. While he has only been in the game a short time, Luke appears to be extremely effective in the highly difficult Light Side Geonosis Territory Battle and has potential to be a Galactic Legend counter. It should go without saying that he will also be highly valuable in Territory Wars and Grand Arena. Looking at all the factors, this Relic belongs in the upper area of the High Priority tier.

Be the first to comment on "SWGoH Relic Review: Jedi Knight Luke Skywalker"