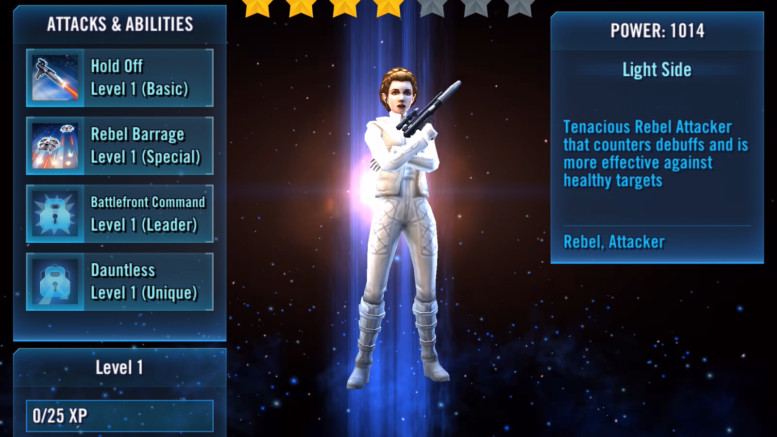 In the newest addition to the Relic Review series, this article will take a look at Rebel Officer Leia Organa and her relic, the DH-17 Blaster Pistol. As always these reviews compare a character at Relic level 0 to Relic level 7 and mods are not factored in.

Starting off, Rebel Officer Leia Organa, aka ROLO, gains a slightly below average Health increase of 17,892. However her 11.45% Armor and 7.54% Resistance increases are both strong to add some important survivability.

Rebel Officer Leia Organa is overall average in SWGoH. The stat increase from her Relic are fairly good but her versatility and damage in general is poor. She does not have much usability in most game modes such as raids, Territory Wars, and Grand Arena. However, ROLO is required to be reliced in order to unlock Jedi Knight Luke Skywalker. That factor alone puts her in the lower end of the High Priority tier but if that isn’t important to you she belongs in the upper end of the Low Priority tier.

Be the first to comment on "SWGoH Relic Review: Rebel Officer Leia Organa"