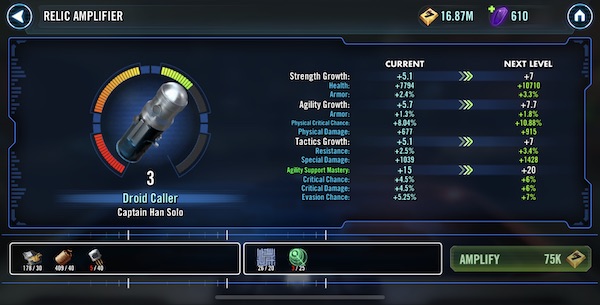 Continuing the Relic Review series, this article will take a look at Captain Han Solo (CHOLO) and his Relic, the Droid Caller. As always these reviews compare a character at Relic level 0 to Relic level 7 and mods are not factored in.

To start off, Captain Han Solo gains an above average Health increase of 19,440. His 10.94% Armor and 7.41% Resistance increases are both strong. He also receives a 15.75% increase to both Dodge Chance and Deflection Chance, an extremely valuable stat boost for a Support and healer.

Captain Han Solo has moderate usability with Rebels as a healer and reviver. In addition, the stat increases from his relic complement him well. By himself he would be in the middle area of the Medium Priority tier. If you also consider that CHOLO is required to unlock Jedi Knight Luke Skywalker, that moves him up to the lower end of the High Priority tier.