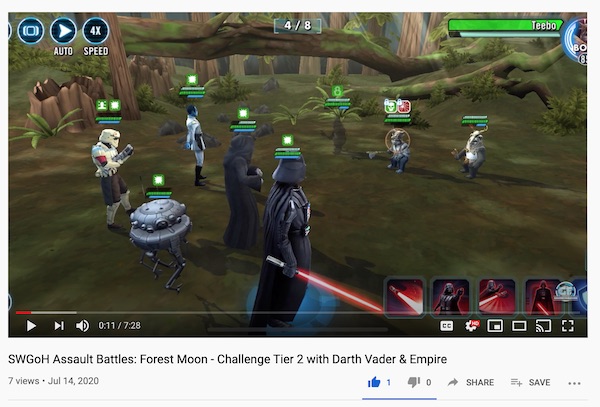 Assault Battles are recurring events in SWGoH that pit users against specific factions and limit the characters that can be used to battle. Star Wars Galaxy of Heroes upped the difficulty in the Assault Battles in early 2020 adding new rewards and much more difficult battles. The addition of Challenge Tier I introduced Gear 12 finisher gear pieces as rewards while Challenge Tier II added Relic materials to the prize for winning. The Assault Battles: Forest Moon event uses Empire or Droid characters facing Ewoks for the prize, and below are the notes of what has worked for me. In addition, note the image link to my SWGoH Assault Battles: Forest Moon – Challenge Tier II video in this article as this will help those who are visual learners like myself.

Battles 1-3 – You face Ewoks who are very fast and will get a lot of turns in. Using Shoretrooper or a pretaunter is gong to help, but I recommend a very strong tank here because these Ewoks start off with the first 10+ attacks of the battle. After surviving this initial barrage, using Darth Vader’s new Merciless Massacre special is key as seen in the accompanying video. Both the offensive firepower of the attacks and the Ability Block debuffs help keep the Ewoks in Battles 1, 2 and 3 in-check, and adding more debuffs from IPD and Emperor Palpatine, especially his Stun, make these enemies even easier to deal with.

Battle 4 – Just like with the Thrawn lead with General Grievous and the Separatist Droids that proven to be successful for many in the past, getting Thrawn to Fracture Teebo as soon as possible is incredibly important as you will see I was able to do this in the video. After getting the Fracture, keep as many debuffs on the pair of Ewok Elders as possible and reapply when they cleanse. If one uses the heal/cleanse ability, try to have Darth Vader use a basic on the other to get the Ability Block, then try to kill them both about the same time. After this keep the taunt on your tank and Fracture Teebo again if you can to keep him under control.

Battles 5-7 – More Ewoks and the same strategy as Battles 1-3. Use Merciless Massacre when you can, Stun as many Ewoks as possible with Palpatine’s AoE, and use Thrawn’s Fracture when needed in Battle’s 5 & 6, but save it in Battle 7.

Battle 8 – This was not nearly the challenge I expected as can be seen in the video. Palpatine’s AoE landed Stun on 3 of the 6 Ewoks and from there is was all about getting Vader to do his thing. Landing the Ability Block on both Paploo and Ewok Elder are very important if they are not Stunned as you do not want Paploo’s taunt or EE to cleanse/heal. After you get EE out of the way pick them off as you wish, but I recommend taking out the attackers (Wicket, Ewok Scout) first to limit their damage potential.