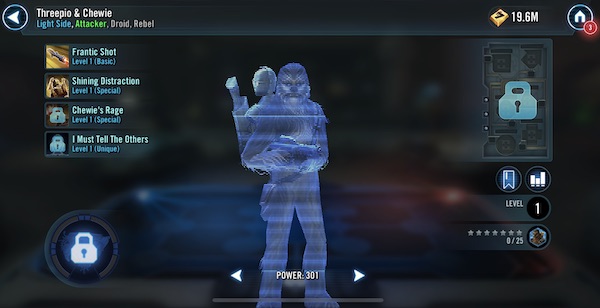 Welcome to the latest article in our series about the popular game Star Wars Galaxy of Heroes where we take a look at the best mods for SWGoH characters. While I do not claim to have all of the answers in this game, I do my research and have used every character I write about extensively. These are mod recommendations based on the character’s kit and actual gameplay to help you in your quest to dominate the Galaxy of Heroes holotables. Since Threepio & Chewie are being released on the day this is written, I will update this once gameplay and testing can be factored in. 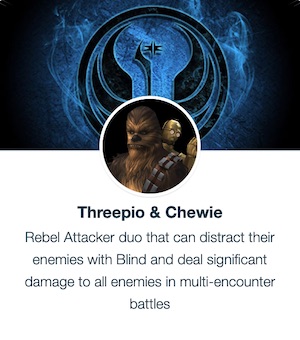 Today’s character to review mods for will be a character who I believe is one of the most creative ideas to come out of EA Capital Games in the past 12-18 months – Threepio & Chewie. The combo character is classified as an Attacker, Rebel and Droid on the Light Side and was first seen in the Cloud City scene while unlocking Jedi Knight Luke Skywalker, and the kit is very similar to the gameplay in that event. Let’s take a look at the best mods to maximize the abilities of Threepio & Chewie in Galaxy of Heroes.

Main Focus: Speed. When mods were added to SWGoH, Capital Games opened a Pandora’s Box. While mods have surely made them a lot of money, I am willing to bet that inside their walls they regret creating mods in the way that they did, with Speed taking over the game. With that in mind, Attackers need Speed to maximize their frequency of attacks, and Threepio & Chewie fit that mold. I do not recommend the use of a Speed set given the max Speed is just 168, but high Speed secondaries are a must.

Additional Areas to Focus: Potency, Offense, Critical Chance, Critical Damage and survivability in the form of Protection. Potency will help the basic apply the Evasion Down debuff, and the Shining Distraction special needs that all-important Blind debuff to land to be fully effective. Offense is important on any Attacker in SWGoH, and with stacking Offense coming from enemy kills triggered by the Chewie’s Rage special and the I Must Tell the Others unique (details below), added Offense from a 4-mod set makes even more sense. Critical Chance will be a wise investment given Threepio & Chewie have just 32.88% CC at Gear 13 and 50.88% at Relic 7, so look to improve upon this important stat. Critical Damage is needed to help the attacks as well, but I would not recommend a CD set and instead just use a CD-focused triangle. Finally, survivability in the form of Protection is recommended given the Shining Distraction special provides Rebel allies with 15% Protection recovery.

Note that the Leader used with the Threepio & Chewie combo is critical to the Rebel team’s success. The I Must Tell the Others unique is pretty awesome in my opinion as it reads, “If the allied Leader is a Rebel, Threepio & Chewie gain 40% of the Leader’s Max Health, Max Protection, Offense, Defense, Potency, and Tenacity at the start of the first encounter, and Rebel allies gain half that amount.” This will make theory-crafters salivate as they concoct new Rebel teams to use in Territory Wars, the Grand Arena Championships and hopefully a new game mode soon…

In-game Mod Recommendations: Critical Chance and Critical Damage. I was expecting this to be Offense and Critical Chance or Offense and Potency, but CD got the nod from the developers over Offense. My initial reaction is to disagree with this recommendation, however I have not been able to do the high-end testing I prefer as my Threepio & Chewie is just 5-stars and Gear 11. The I Must Tell the Others unique boosts Offense, not CC or CD, and the Chewie’s Rage special also has a situational stacking Offense component, so I am going to stick with Offense and Critical Chance as the mod sets for Threepio & Chewie with high Potency and Speed from the secondary stats.

The “ideal mod setup” can be interpreted a few different ways. If you target Speed, Offense, Potency, Critical Chance and Protection through the mods you should be able to maximize Threepio & Chewie’s kit. Here are my recommendations for the best mods for the Threepio & Chewie in SWGoH: