The recent update to Harry Potter: Wizards Unite has changed the way we look at SOS in the game, for now at least, as the old SOS Assignments that my family so enjoyed have taken a back seat to the new major focus of the game – SOS Training. While this article is not intended to help educate the community on how the Magicum Vitae works (there is a small wizard icon to click on when you get into the SOS Training section that explains all of this), what I do want to share is my insight into how I am prioritizing the upgrades. Note that these are based on my opinion – I do not claim to have all of the answers in HPWU but I have played the game since the first hour it was launched, and at the time of this article I am at Level 44 while 99% Free to Play (FTP). I am also consulting my wife, also Level 44 and completely FTP.

These are the SOS Training upgrades that I am jumping on immediately, even if lesser upgrades are in the progression system to get to these highly-valuable enhancements. 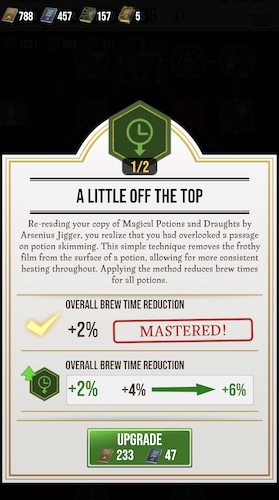 While specific potions can have time reduced from their brew time, the most valuable potion upgrades are those that upgrade ALL potions. A Little off the Top (pictured) is located in Calamity Essentials III on the right, deep under Level 38, and, while costly, allows up to 4% total brew time reduction of all potions.

Similarly, overall Mastery is incredibly important, possibly the most important stat to increase of them all in the SOS Training. Mastery helps you catch Foundables, and the more you catch the more resources you get and the quicker you can progress in the game. Upgrades like Swish and Flick, located in Calamity Essentials I under Level 8 upgrades on the right side, increase overall Spell Mastery, not just Mastery for a particular family.

Speaking of Mastery in specific families of Foundables in HPWU, these specific upgrades can be quite helpful. Lower down my list is where I discuss Departure Denial upgrades, and while that seems to be a nice thing to increase, the Mastery of the specific families of Foundables is far more important in my opinion. Mastery controls how likely you are to catch a Foundable, so enhancing this stat overall will help in catching all Foundables. Enhancing this stat in Dark Arts will make all Dark Arts Foundables easier to catch. If they are easier to catch, they are also less likely to depart if you cast a good spell, so unless you are a poor caster of spells, the Mastery stats are more valuable upgrades. 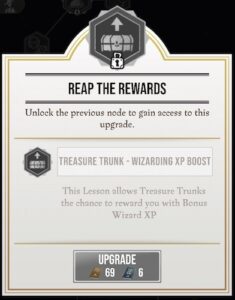 Treasure Trunk enhancements impact the rewards from leveling pages up within the specific Foundable families. This SOS Training upgrade is, in my opinion, the most underrated upgrade in this new addition to the game.  My original thought was that the longevity of the rewards gained is where the key is, however after making 6 upgrades to the Treasure Trunk I now get 700 XP (an additional 100 XP for each upgrade) whenever I level a Registry page up. For serious players who play daily, and especially those who play a lot each day, this could happen 5-10+ times a day, and with 600 more XP each time we are talking about a few thousand more XP gained daily. If you upgrade these rewards early in the new SOS Training you can enjoy them for months to come, so consider the Treasure Trunks to help you earn more XP faster in HPWU.

Personally, I see great value in many of the other upgrades that reduce brew time and increase the potency of potions, however this largely depends on your gameplay and use of potions. In my game, Healing potions are rarely used, Wit-Sharpening potions are not see as high value, and weaker Invigoration Draughts are similarly not preferred. Therefore, the upgrades to these potions are largely avoided for my gameplay. Meanwhile, I focus heavily on Exstimulo potion upgrades and the improvements and reductions of time for Baruffio’s Brain Elixir, Tonic for Trace Detection, Dawdle Draught and Strong Invigoration Draught. The Potent Exstimulo potion alone has many good upgrades early in the use of these new SOS Training enhancements. While I had this in the high priority category to start, I have since moved it to medium priority to make room for the Treasure Trunk upgrades.

Departure Denial, mentioned above, is a nice-to-have stat increase that just does not strike me as high priority in HPWU based on how the game has played out over the first year of its existence. I see this as a stat that is more valuable to those who commonly focus on harder to catch Foundables (anything with a light) and/or those who rarely use a Dawdle Draught in the tougher fights. Maybe the game will evolve in such a way that we need to enhance this stat to have a shot at catching Tom Riddle, the Whomping Willow, etc., but for now I only have this as a Medium Priority. 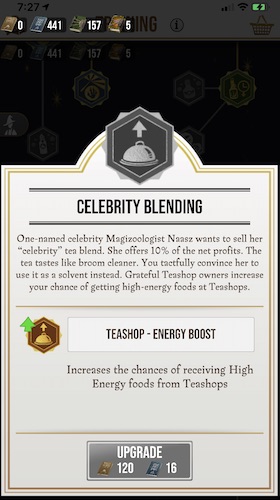 These are the SOS Training upgrades that just do not wow me initially.

Three Field Charms were added with the July 2020 update that added SOS Training to Harry Potter: Wizards Unite. They include the Trace Charm, the Inn Charm and the Greenhouse Charm. Maybe the new charms will grow on me over time, but at least early on these are not really exciting me, my wife or our son very much. As a result anything that impacts the Trace, Inn Charm or Greenhouse Charms is low on my priority list for these upgrades.

Potion upgrades to the potions I rarely use – Healing, Wit-Sharpening and the weaker Invigoration Draught – are low priority for me. As I mentioned above, where you rank specific potions and how you use them will determine the prioritization of specific potion upgrades.

Inn boosts, such as the Teashop, Pub or Restaurant, only impact what you get when you go to an Inn. Before COVID-19, Inns had higher value as Spell Energy was not lying around at every spawn point on the map, making these boosts more important than today. While things may change back in the future when “the world gets back to normal,” I am hopeful that Niantic considers keeping all or some Spell Energy on the ground permanently as this keeps the game much more exciting and playable for those in rural areas where Spell Energy is not as prevalent. If the game does revert back to Inns as the main source of Spell Energy, I will likely move this category of upgrades to Medium Priority.

Be the first to comment on "HPWU: How to Prioritize the SOS Training Upgrades"