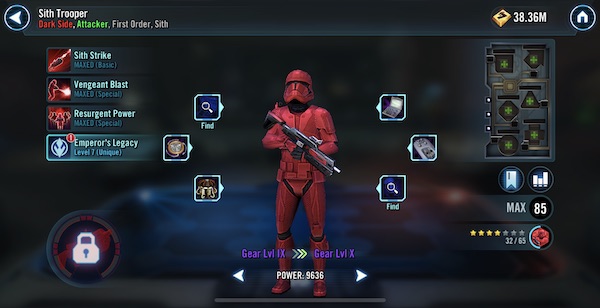 Continuing the Relic Review series, this article will take a look at Sith Trooper (the First Order one) and his Relic, the ST-W48 Blaster Rifle. As always these reviews compare a character at Relic level 0 to Relic level 7 and mods are not factored in.

To start off, Sith Trooper gains an above average Health increase of 19,746. His Armor and Resistance increases are both strong, 11.27% and 8.41% respectively.

On the offensive side Sith Trooper receives an excellent Physical Damage increase of 2,706 which pairs well with his 18% Physical Critical Chance increase. He also gains an additional 90 Armor Penetration and Resistance Penetration, adding to the stat gains which fit nicely with the preferred mods for Sith Trooper in SWGoH – Critical Damage and Tenacity. Finally, Sith Trooper gains an extra 13.5% Accuracy to help ensure his strong attacks aren’t dodged.

Sith Trooper greatly increases the damage output of any First Order or Sith team and the stat increases from his Relic complement his role as an Attacker well. In addition he is required to unlock Supreme Leader Kylo Ren. He is very useful in several game modes from the Squad Arena to Territory Wars and Territory Battles. Because of these factors, I am placing him in the middle area of the High Priority tier.