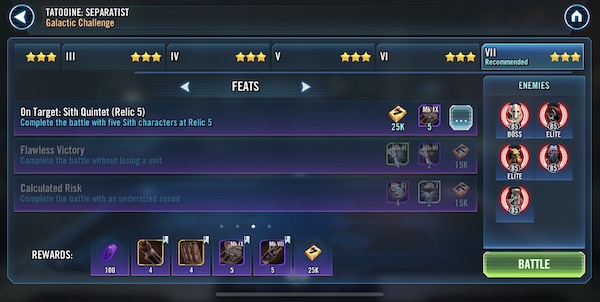 Galactic Challenges were introduced in Star Wars Galaxy of Heroes, and while other Content Creators started giving their opinions before even attempting a battle, I wanted to be a bit more patient and give Capital Games a fair shot. While the developers of SWGoH certainly deserve many of the criticisms that we, the SWGoH community, place on them, I cannot simply judge this book by its cover. Here are some of my thoughts.

Gameplay – First off, any new game mode that works is a good one. Let’s be honest about this – CG has struggled in this department in the past, but so have their competitors. To begin, Galactic Challenges work, so that is a good start. One element that is disappointing early on is the inability to keep playing. Yes, we have more to do now, but I was hoping for something like an improvement on Marvel Strike Force’s Blitz mode, a game mode where we can continue to compete while getting diminishing rewards. From what I can tell so far, once you accomplish all of the Feats on a Tier level you are done.

Usability – I get that there are a lot of items to communicate in Galactic Challenges, but I feel like there may be a better way to communicate it. Right now it feels like a lot of clicking to get to the info we need to know, but I do not have a better solution at this time.

Difficulty – There is certainly challenge at the higher levels and in accomplishing all of the feats, but the item that irks me the most is that you have to have characters at certain Relic levels to meat the requirements.

Rewards – This is where I saw a LOT of discussion early this evening on Ahnald’s live stream and while we always want better rewards, I will hold off on my judgement here.

Final Thoughts – CG stated that this was going to be a trial run of Galactic Challenges and that they would gather information and make adjustments. I certainly hope this is true. I like what I am seeing but it seems to be lacking a bit, so I am hopeful that they can do more with it to keep things interesting and “new” while encouraging more worthwhile gameplay of SWGoH for those who choose to play more.

Be the first to comment on "Updated: SWGoH Galactic Challenges – Early Thoughts"