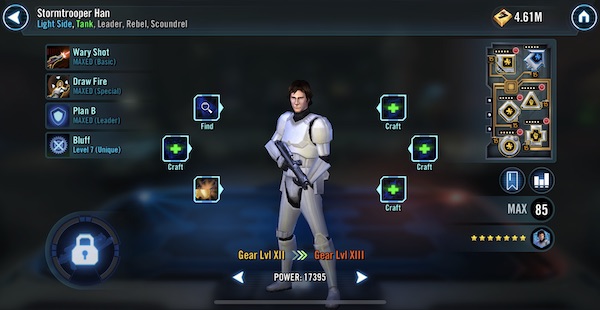 Continuing the Relic Review series, this article will look at Stormtrooper Han and his Relic, the E-11 Blaster. As always these reviews compare a character at Relic level 0 to Relic level 7 and mods are not factored in.

To start off, Stormtrooper Han gains a very impressive Health increase of 24,840, one of the top gains across all of SWGoH Relics. In addition, ST Han sees a 9.99% Armor boost and a 5.49% Resistance gain as well. He also receives a very valuable 15.75% increase to both Dodge Chance and Deflection Chance as well as an additional 9,000 Protection.

On the offensive side Han only gains two stat increases. The first is a below average Physical Damage boost of 1,510 and the second is a 17.96% Physical Critical Chance increase.

Stormtrooper Han was already a solid tank that could fit well on most Rebel or Scoundrel teams and the stat increases from his Relic, namely the large Health and Evasion Chance increases, have enhanced that usability. As a result, I am placing him in the middle area of the Medium Priority tier.

SWGoH: Should I Buy the Galactic Marauder Bundle and Pack?

Be the first to comment on "SWGoH Relic Review: Stormtrooper Han"