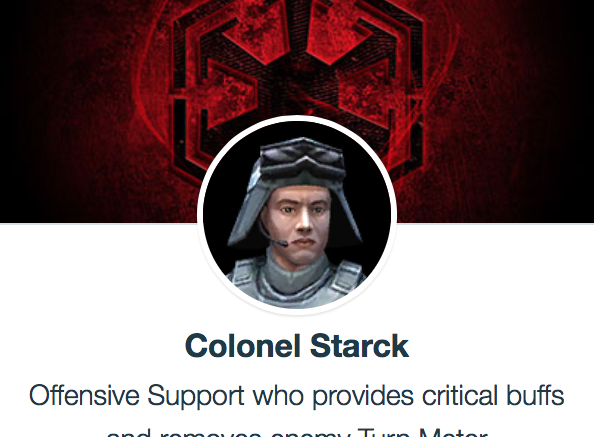 Continuing the SWGoH Relic Review series, this article will look at Colonel Starck and his Relic, the SE-14R Blaster Pistol. As always these reviews compare a character at Relic level 0 to Relic level 7 and mods are not factored in.

To start off, Colonel Starck gains an above average Health increase of 19,440. He also gains very impressive Armor and Resistance increases as well, 12.69% and 10.17% respectively. On top of that he gains a 15.75% boost to both Dodge Chance and Deflection Chance, adding to the fantastic improvements to his survivability, an area that was mentioned as a need in our Colonel Starck mods guide after he was first released in SWGoH.

On the offensive side Colonel Starck gains a bit of a disappointing 1,631 Physical Damage increase. This is balanced out by a very impressive 32.92% Physical Critical Chance increase. Finally he gains a 13.5% Critical Damage bump.

Colonel Starck has minor Empire synergies but he is an essential member of any Imperial Trooper team. While Imperial Troopers have fallen far from usability lately, there are two points to consider. The first is that the latest Trooper, Admiral Piett, is an excellent character who early impressions indicate will greatly enhance the team. The second point is that Admiral Piett, General Veers, and Colonel Starck are all required at Relic levels for the Galactic Legend event for Sith Eternal Emperor Palpatine, a fact that will greatly increase the number of reliced Troopers in the game. Starck belongs in the lower end of the Medium Priority tier but if you consider him being needed for a Galactic Legend, he moves into the upper end of the Medium Priority tier.

Be the first to comment on "SWGoH Relic Review: Colonel Starck"