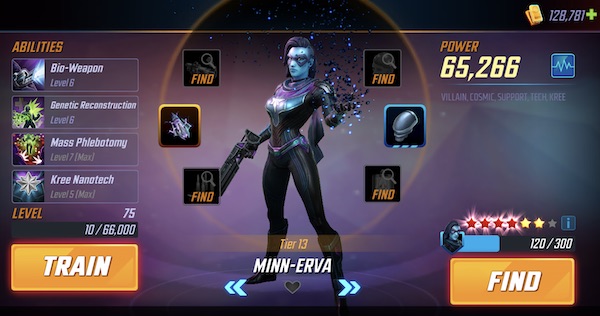 Welcome to the Iso-8 guide for Minn-erva, the latest in our series about the popular game Marvel Strike Force. In this series we look at the best Iso-8 enhancements for MSF characters. While some may refer to Iso-8 as simply “mods” like in other mobile games, we will look to stay true to the naming convention of the Marvel universe and the developers over at Scopely. We at Gaming-fans.com certainly do not claim to have all of the answers in this game, but we do our research and look to use every hero and villain we write about extensively. These are Iso-8 recommendations based on the character’s kit and actual gameplay to help you in your quest to dominate in Marvel Strike Force. Note that these Iso-8 classes may differ from one team makeup to another, so feel free use this as guide knowing that these can change in differing situations within MSF’s gameplay.

Today’s character to review is Minn-erva. A character who had a decent, but not huge role in the Captain Marvel movie, Minn-erva is a bit OP in Marvel Strike Force in comparison. That having been said, if you’re one of the lucky few who went all-out in her event in 2019 you definitely benefitted given how hard it was to acquire her shards. In MSF, Minn-erva is a Villain, Cosmic, Support, Kree and Tech character who is almost always best used on Tech teams. Let’s take a look at the stats we want to focus on enhancing when Iso-8 modifications are added to the game.

Main Focus: Health. Minn-erva is a healer who can even bypass Heal Black with her Mass Phlebotomy special, and any battle that includes Minn-erva, no matter how dire, is a battle you still have a shot to win. Build up her survivability, Health in particular, to ensure she stays alive to heal, revive and assist her teammates. Note that her Kree Nanotech ability heals teammates for 15% of Minn-erva’s Max Health on an enemy Death, so the higher this stat goes, the more valuable this healing will be.

Additional Areas to Focus: Defense, Potency, Tenacity. While much depends on the stats you can improve through Iso-8 modifications, it seems likely that these three will indeed be enhanceable stats. Added Potency will help Minn-erva land the Bleed debuff more consistently on her basic and the Mass Phlebotomy special. Tenacity, or the enhancement of her ability to resist debuffs/negative status effects, will only help ensure she does not get Ability Block or other crippling red icons above her head. Finally added survivability in non-Health stats is wise to keep her alive longer, but Health should always be the #1 focus above everything else.

The best Iso-8 Class for Minn-erva is going to be one of two options – Healer or Fortifier. Fortifier has some nice stat gains in adding Barrier to the character which is impacted in part by their Max Health, but it is focused primarily on the survivability of that individual character and does not otherwise impact their teammates. Given the fact that Minn-erva, Scientist Supreme and only a select few others in Marvel Strike Force have the power to revive a previsously defeated ally, I see the Fortifier Class as a strong option given the increases to their Max Health and significant increases in overall survivability. The Healer Class is certainly not a bad option for Minn-erva, I just feel the Fortifier class has a lot of value for Healers who have a revive component to their kit.

Be the first to comment on "MSF: Best Iso-8 for Minn-erva"