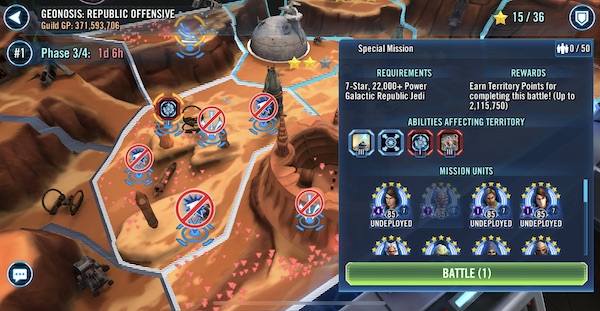 The following is a Walkthrough of my experiences in Phase 3 that will be updated over time. Phase 3 has five Combat Missions, including the Ki-Adi-Mundi shard mission, along with two Combat Missions requiring Jedi, a 7-star, 22,000+ power Jedi mission in the South and this one, a 7-star, 22,000+ power Galactic Republic Jedi mission in the South. Below is what I used on this specific mission:

01.14.21 – I jump into battle at 148k power and start with a Sniper Droid, B2, B1, BX and a Command Battle Droid. I start by focusing on the B2 and do well there, but eventually the Sniper Droid and his buddies get rolling and before I can take the Sniper Droid out I lose JKA. I take out Sniper and B1 then finish off the BX and CBD to finish a disappointing first wave.

The second wave of enemies has a B2, a B1, a B1 Heavy Gunner, a Sniper Droid and a MagnaGuard. I start working on the B2 and get him down but then get stuck behind the Magna taunt. While I kill him off, my team is hurting and I lose GK before killing the B1 and his Heavy Gunner friend. In the end I am left with my 3 remaining – GAS, GM Yoda and Barris – facing the Sniper Droid. Luckily I finish him off thanks to GM Yoda removing turn meter and Anakin’s power.

The third wave is a B2, Sniper, General Grievous, Asajj Ventress and General Kalani. I lose Yoda early as the Sniper Droid does his thing and this one is over quickly. The Sniper gets a hit on GAS to kill him as well and Barriss has no hope at that point. While I scored 1,008,150 Territory Points, this is my worst Combat Mission this TB.

03.16.21 – Fighting this again after hitting 3/4 last month I am now using Ahsoka Tank in place of Barriss Offee. One recommendation was to not use GAS here at all, but me being stubborn after just taking him to Relic 8, I just felt I needed to see if this team can get it done. I power through the first wave of enemies taking out the B2, then laying several hits on the B1 while taking out the Sniper Droid, then finishing the B1 and moving on to the others. In the second wave I get through the B2 quickly, but get stuck behind the MagnaGuard’s taunt, using Ahsoka and JKA to dispel. After getting around MagnaGuard and taking out the Sniper Droid the B1s go down and basics to end it help set me up for the real challenges.

The third wave sees me take out the B2 and then have GMY remove TM from the Sniper Droid which allows me to beat him with ease. I hit GG a couple of times hoping to get lucky and instead he target General Kalani so I have to finish him off to get around GG. After Kalani I take out GG and then use basics to get through Asajj and move on to the final wave with all of my characters alive and fairly healthy.

The final wave is Wat Tambor with Nute Gunray, a B2, a B2 Rocket Trooper, Count Dooku and Poggle The Lesser. The b2 is my target but holy crap this goes South fast. The B2 Rocket Trooper keeps gaining taunt and I am unable to get those final 2 stacks off of the B2 as they pick me apart. I end up with 1,436, 500 Territory Points.