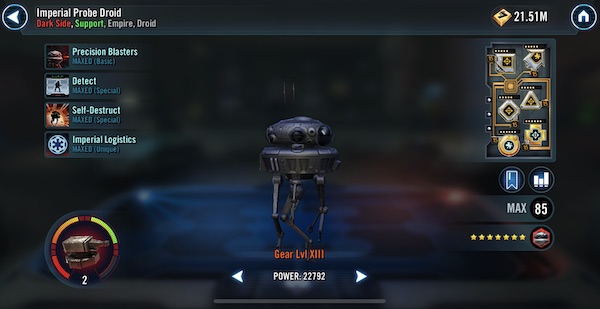 Phoenix Rebel leader Hera Syndulla and the star of The Empire Strikes Back, the Imperial Probe Droid are the latest recipient of new Omicron abilities in Galaxy of Heroes. While both were expected to be getting an Omicron ability upgrade based on previous news releases, it is likely that these are the final two Omicrons to be introduced in SWGoH until 2022.

Hera Syndulla, one of the main characters in the Star Wars Rebels animated series, now has an Omicron upgrade added to her leader ability Rise Together that adds the following text:

Whether this will make the Phoenix Squadron relevant in Territory Wars for guilds of all levels remains to be seen, but this is a significant improvement to a faction that was a lot of fun to use when they were first released, but has suffered from the game’s natural power creep and evolution.

As for the Imperial Probe Droid, this support character gains the following text in Territory Battles:

SWGoH: Should I Buy the Empire Faction Pack?