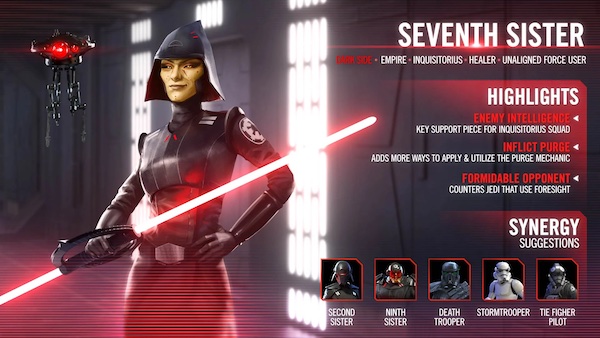 Be ready SWGoH players, controversy is coming. An announcement from EA Capital Games came yesterday that is sure to stir things up and it all centers around the new Inquisitor characters. A rather lackluster faction thus far, players who have not gone all-in on these otherwise unpopular canon characters are about to be punished. In the past, Legendary characters in SWGoH have had rather reasonable unlock requirements – until now. Not only is EA Capital Games going to change their rules for the player base, but in they are also making four characters that really do not impress anyone incredibly important. Here is part of their recent post on the topic after referencing that Fifth Brother is joining the game soon:

Alongside this character we will be updating all the current Inquisitorius kits with a new Unique ability to bring the full squad together. We also wanted to inform you that over the next few weeks and months there will be a need for this group in multiple areas in the game. Now is the time to get your Inquisitor team ready to do battle!

You will see Inquisitor specific requirements in locations such as:

Honestly, had this team looked like anything of value early on, maybe I would have invested into these otherwise useless characters. To now require them at such a high level AND change the bar is certainly not a good look and is sure to tick off the player base. While I am sure I will whale out for the sake of new content, since this is really the only new content we ever get in this billion dollar game, the requirements in Conquest, etc. are what really bothers me as that game mode is about as much fun as getting a root canal.

So what do you think about the high important of the Inquisitorius characters and new Legendary character requirements? Tweet us @GamingFansDFN or comment below.