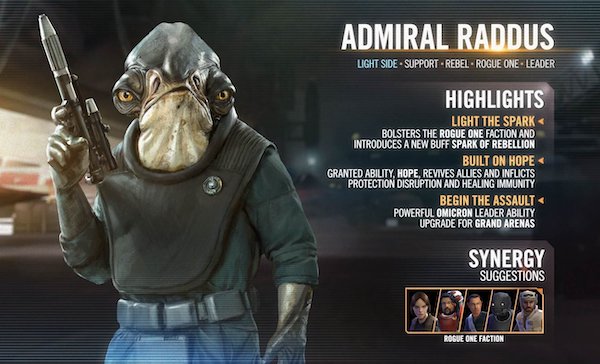 The newest addition to the Star Wars Galaxy of Heroes roster is on his way as Admiral Raddus is set to boost Rogue One faction. Here is the description from EA Capital Games on the SWGoH forums:

The Rebellion’s most prominent fleet commander, Admiral Raddus, is making his way to the holotables! This Mon Calamari Admiral breathes new life into the Rogue One faction with abilities Protective Shot, Blue Squadron Air Support, and Inspiring Maneuver. Raddus is key to adding the Spark of Rebellion to his allies, as well as enabling them to Upload the enemy’s top secret plans to give Hope to his allies on the battlefield. Admiral Raddus’ Grand Arena Omicron will give players a powerful Rogue One squad, so be sure and collect this character in the brand new Marquee event, SPARK OF REBELLION, coming this week.

The addition of Admiral Raddus hammers home the fact that the monthly SWGoH login character being Baze Malbus was certainly a hint, but also adds what the community seems to love – another Omicron ability in the Grand Arena. While the developers have tried Territory Battle and Territory War Omicrons, the truth is that the GAC Omicrons are far more valuable than having an Omicron that may benefit you 4 times a month in TW. While this new Marquee character is set to join SWGoH this week, it will certainly make owners of Relic Chirrut Imwe, Baze Malbus and more happy, and it will be interesting to see how his kit plays out in actual gameplay. Here is a look at Admiral Raddus’ kit on the SWGoH forums for reference.