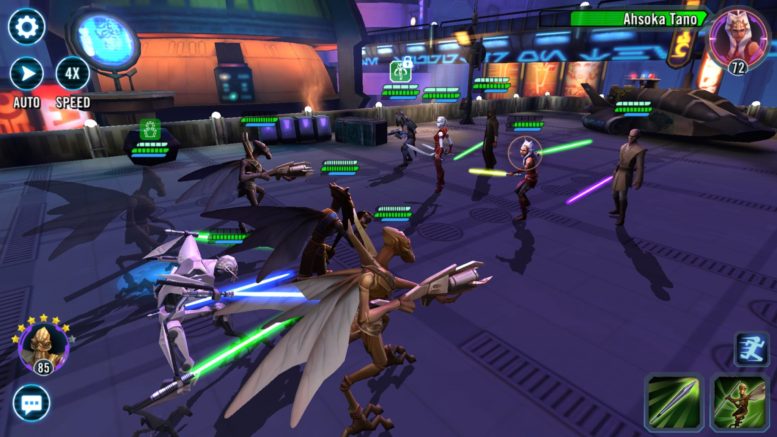 Welcome to the Best Mods for Geonosian Spy – the latest article in our series about the popular game Star Wars Galaxy of Heroes where we take a look at the best mods for each SWGoH character. While I do not claim to have all of the answers in this game, I do my research and have used every toon I write about extensively. These are mod recommendations and they are certainly not the only option. However we look to help players maximize their characters in SWGoH and we are always open to feedback if you have a mod setup that works well for your gameplay. 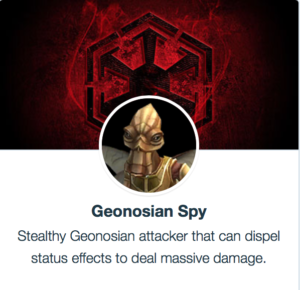 Today’s character to review mods for will be Geonosian Spy, one of four Geonosians in the game at the time of this initial writing and at the Mods 2.0 update, and now one of five Geonosians in SWGoH. His kit relies heavily on critical hits, like his teammate Geonosian Soldier, and his ability to not only dispel buffs but also hit harder for each buff the enemy has puts him in a Darth Vader and Boba Fett-like category. Let’s take a look at which mods are best suited and which stats we want to enhance for Geonosian Spy.

Main Focus: Critical Chance. While Speed is the key stat to improve for most SWGoH characters, when used correctly, Geonosian Spy does not need Speed as much as others. His unique, Hive Tactics, grants him 35% Turn Meter anytime a Geonosian ally inflicts a debuff/negative status effect on an enemy (changed in June 2019 from 70% to 20%, then upped to 35% with the July 2019 rework), so if used as intended with Poggle The Lesser, Sun Fac, and Geonosian Brood Alpha, Geonosian Spy can gain a lot of Turn Meter from the three of them debuffing enemies regularly.

Additional Areas to Focus: Speed, Potency, Critical Damage, Offense and survivability. Given the need for high Critical Chance, high Critical Damage is logical for Geonosian Spy – if you’re going to get critical hits you might as well have them hit for 180% or higher. Speed is important on every character in SWGoH, and the Turn Meter gain from Geonosian-applied debuffs is not a strong enough mechanic to rely on this alone. Thus, bump his base Speed of 147 up to ensure he has more chances to dispel and annoy your opponent. Potency is much more important after the July 2019 Geonosian rework as Geo Spy now can Expose all enemies with his Illicit Intel special. Finally, survivability in the form of Defense, Health and Protection is important to keep him alive as long as possible, but note that under Geonosian Brood Alpha‘s lead all Geonosians gain 15k Max Health and 15k Max Protection and recover 3% Protection when using a basic ability. I would also look to add Offense given the new importance of the Geonosians in the Territory Battles: Separatist Might event. The Geonosians do not hit very hard and the Clones and Jedi you face are very difficult, event with GBA’s lead granting the 10% more damage when attacking debuffed enemies, so added Offense on a character that should crit often is only going to help.

In-game Mod Recommendations: Critical Damage & Critical Chance. No disagreement here, especially with the updates to the game in 2019. Having used him extensively since that rework I see no reason to go against this recommendation by CG.

Because Geonosian Spy is so heavily reliant on critical hits, a set of 2 Critical Chance and 4 Critical Damage mods are the route I recommend which is now what the in-game suggestions show also. Let’s take a look at my recommended approach for Geonosian Spy’s mods:

[…] many others. Thus, high Potency is quite valuable, and is even more valuable when using Poggle with Geonosian Spy given GS gains 70% Turn Meter whenever a Geonosian ally inflicts a negative status effect on an […]