Star Wars Force Arena was released in January 2017 and featured player versus player and multiplayer modes. 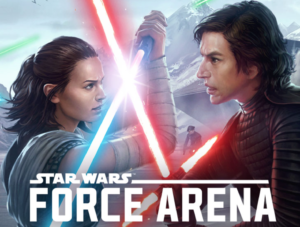 Players could collect characters units, represented in the form of cards, that they would collect, upgrade, and take into battle. Lead by a hero (legendary character) and a variety of support characters determined by the player, your forces took to the battlefield in real time, where each card held a specific energy level on each card.

More than 30 Legendary Cards existed in Star Wars Force Arena each with their own corresponding Unique card (only two exceptions existed). Unique cards featured characters who acted as support to the Legendary card character and could only be played alongside that Legendary card. Cards were be acquired in a variety of ways including from Victory Packs, completing in-game missions, and the SWFA game shop.

The May 2018 3.0 Update saw that Force Arena added Data Cards to the mix – enhancements that could be added to your decks. In addition, Perks could power up your Legendary Card heroes by enhancing their movement speeds, attack power and more.

Not long after reporting that SWFA was not on the same level as other games we played and covered in October 2018, the community was given word in December 2018 that Star Wars Force Arena would be shutting down and updates were no longer planned.