Raids challenge alliances to work together to clear the board and earn prizes to strengthen their individual rosters. 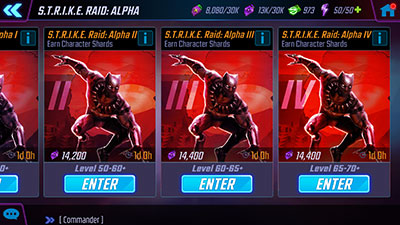 Thanos Raid – The only way to earn Thanos shards when it was first released, the Thanos Raid was retired but made a short comeback during the early days of Avengers: Endgame

S.T.R.I.K.E. Raid: Alpha – The S.T.R.I.K.E Raid: Alpha originally came in three tiers and allowed players to compete for We Are Venom Orb Fragments to gain shards needed to unlock Venom. However, the latest iteration of the Alpha Raid is a limited time raid centered around Black Panther.