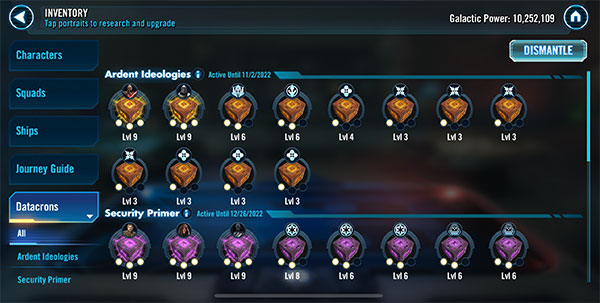 Datacrons were introduced in Star Wars Galaxy of Heroes in mid-2022 with the purpose of temporarily boosting an entire squad in specific battle types. These complex power-ups were fantastically described by NicWester on the SWGoH EA Forums in June 2022 as:

Think of it as a mod for your entire squad with a minimum requirement of relic 3 to use.

They use their own currency to level up, sort of like how ships and characters use different things so that working on one won’t slow you down on the other. These currencies are mostly gained from Conquest.

Given the millions of variables for Datacron stats, it is hard to say what the “best Datacron” looks like. But like our popular “best mods” section for the game, we will work to try and help the fanbase better understand Datacrons and pick the best Datracrons in SWGoH for each particular series.