Countering the Popular Teams in SWGoH

A big part of the Offense Phase of Territory Wars in SWGoH  is picking the right tools for the job. In previous articles we have talked about which teams are great to attack with, and who you should attack, but Star Wars Galaxy of Heroes is a game that is always evolving. With Galactic Legend characters in SWGoH, having specific counters have become even more important. The ability to use a comp made up of non-Galactic Legends to defeat Rey, SLKR, JMLS or SEE is critical, especially for endgame players an in the upper and top-level guilds.

To start, pre-fight checks are important, especially on specific team compositions. For defensive Darth Revan teams in the GAC and Territory Wars, for example, the pre-fight checks are much more important when using a non-Galactic Legend character counter as opposed to a GL to stop DR and his Sith Empire teammates. However we all prefer the cheese approach – taking a much stronger team in for an easy win. That having been said the truly elite players in Galaxy of Heroes study the characters involved, the turn order and stats needed, and know how to counter every team their opponent can throw at them. 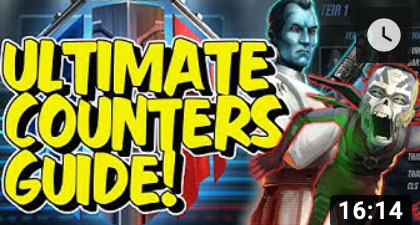 While the parameters of how each counter will work may vary, and RNG (luck) is always a factor, getting the team comp to allow your roster the flexibility for later battles is the first step to success. As a result pre-fight planning is essential to those looking to truly be the best, from researching your opponent to having your mods prepared before rosters are locked.

Below we will take a look at some of the most important things you can do to be prepared for Territory Wars and the Grand Arena Championships and see more success in both game modes. In addition, we will look to add videos to complement this content for those of you who are more visual learners.

Having success in the GAC and Territory Wars starts with planning, and it is a lot more than just have high gear levels on specifics character factions. Here is a look at keys to Territory War attack phase success: