Asgardians are one of the strongest war defensive metateams. With the introduction of Hela, Sif, and Heimdall in late 2019 along with the buffs to Thor and Loki, the Asgardians immediately became a roadblock for war. Many of the strongest offensive teams at the time didn’t make a dent in them even with big punch downs.

Asgardians are one of the few war defensive metas which have a strong purpose outside of war. Hela is a staple on Ult7 raid teams, in Dark Dimension 3, and in Arena. They can function well as a raid team for Alpha on the Cosmic lane and for several nodes on Beta. The general utility of the team means that many people have leveled the Asgardians to high level and it’s not common to see 500k Asgardians in war in Top 100 alliances. Loki and Hela are very good in PvP matches, particularly paired together.

The Asgardians don’t have much optionality. Basically it is the 5 Asgardians.

The power balance of a team can make a key difference. It’s important to gauge this team relative to their nominal team power. 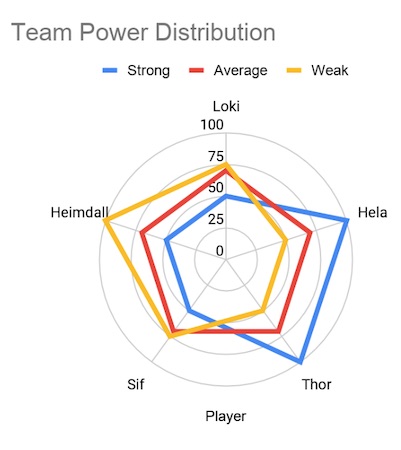 Strong Thor: Thor is the key damage dealer for the team. So if he is strong, his passive AOE can be devastating.

Strong Hela: Hela has an opening AOE that can wipe out many team members if she is strong.

Strong Sif: If Sif becomes strong, it can be difficult to take her down. This can be a problem if you get stuck behind her because you can end up charging up Thor.

Strong Loki: Loki isn’t a damage dealer and is pretty squishy. He is a controller and does most of his damage at moderate levels.

Strong Heimdall: Heimdall isn’t a major factor on the team. All things being equal, if he’s strong relative to the rest of the team, it makes the team easier than their nominal team power.

Asgardians are pretty fearsome at 6,664 ability levels, but there are several key upgrades that can make them even harder to take down.

General Features of the Defense

The Asgardians have defense up for 2 turns which means that most burst war offense teams are going run into problems. Sif has a stout taunt and has a high block chance, so it’s easy to get trapped behind the taunt.

Hela’s summon heals the team after each death along with rewinding the turn meter 10% and for each Asgardian you kill in war, another summon appears. So as you take down more Asgardians, you can be stuck killing the summons with splash damage, healing the opponent and slowing you down.

Thor is the key damage dealer on the team. Thor is slow, so his attacks aren’t the key threat — though if his ult goes off, the stun of the whole team is dangerous. The real danger comes from the fact that every Asgardian ally attacked, Thor gains a charge and at 5 charges he automatically does an AOE attack. These charges are generated for attacks on Hela’s summons, but not on Loki’s clones or on Thor himself. Key to this is that AOE attacks only give Thor 1 charge not 1 per character hit.

Loki also plays a key role on the team because when a player falls beneath 50% health, he stealths them automatically. This means you can’t whittle down an opponent slowly because they’ll disappear as a target and then heal up from the inevitable deaths of Hela’s summons. Loki also has a nasty first turn special where he mind controls 2 characters and gives defense down to his target. This means that if your glass canon gets targeted, you can lose your offense before you even go. Finally, Loki also has an ult that will stealth the whole team for 2 turns and produce up to 3 clones. This can be very painful because you often end up having to target Hela’s summons, healing the team.

Heimdall is also on the team, his primary benefit is being an Asgardian. He does some damage and provides some small team benefits, but he primarily benefit from being stealthed by Loki and give Thor charges when he’s attacked.

Basically any team that has quick burst damage as their primary way of beating an opponent is going to have problems against Asgardians. The 2-turn defense up mutes that damage along with the heals that come from Hela’s summons really stop them.

It’s not always possible to cleanly take down an Asgardian team, particularly if the defense is higher than any of the appropriate counter meta teams available. The best decision for the Asgardians is to use a sacrifice strategy, but you should also be ready to clean-up an unsuccessful attack.
Sacrifice Strategy
For very high Asgardians, you might not have enough firepower to take them down in one shot with a counter. If this is the case, there is an effective sacrifice strategy that can save attacks. A key component of the Asgardian ferocity is the opening attacks of Hela and Loki. So by having a mid-level team eat these two opening attacks, you can make it a lot easier to take down the Asgardians with one of the counters.

The key thing is to not to charge up Thor — if your team lasts too long and has to start attacking, you’ll end up having to hit Sif, which can quickly charge up Thor and cause the follow up attack to get a Thor passive AOE attack early into the match.

The key challenge with a clean-up is always knowing what state the defense is left in. Usually that’s just the players remaining and how close characters are to their special and ult abilities.

Even more important than the energy is how charged Thor is. As an example, imagine that there is a powerful Thor left standing in Cargo Bay with Hela and Loki. Thor has 4 charges and he ends up being stealthed. On turn 1, you attack Hela or Loki — Bam! — Thor’s passive AOE can nuke the entire team. The person with an unsuccessful attack must tell the alliance if Thor is at 3 or 4 charges, otherwise it’s easy to waste another attack or two.

It’s for this reason that the Sacrifice Strategy being determined ahead of time is really useful — you can avoid charging Thor and get rid of the initial moves of Hela and Loki.

Sif-Thor: You should be careful of Sif-Thor combos because you can end up only being able to target Sif and can get nuked by Thor.

No Heimdall: If Heimdall is down, Magneto can be useful because his blind will work and Pyro can clear buffs.

No Loki: If Loki is down, most of the characters with the exception of Sif are pretty soft and damage dealers can nuke them — so a Rocket Racoon, Groot, Star Lord combo and take down a Hela.

Loki + Hela: Be careful on assuming that because all characters are below 50% health that Loki’s stealth is ineffective because Hela’s summons can heal on their death and frequently return team members above 50%.