Like in Star Wars Galaxy of Heroes (SWGoH), where Runes are called Mods, Runes are used to enhance the basic statistics of your characters in Dragon Champions (DC). For example, you can increase the speed, shield, potency, and tenacity of your character, and so on… Always facing a faster team? Runes with speed can help there. Not being able to land debuffs? More potency needed! 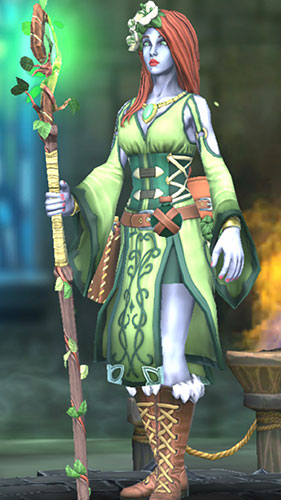 Like in SWGoH, there are 6 Rune spots, with different shapes which are placed on the “Rune Amulet.” This is broken up into 6 areas – North, South, Northwest, Northeast, Southwest and Southeast. Runes can be placed on characters from Level 15 onwards.

No Rune is able to have exactly the same statistic as its primary and one of the secondaries statistics. For example: Shield% cannot be both in a primary AND secondary, BUT shield% primary and a flat shield value is allowed.

Now it gets a little complicated.

The Northwest Rune is one of the 3 important ones. It can get ARMOR %, DAMAGE %, HEALTH % and SHEILD %. Potency % and Tenacity % are also possible and are ONLY unique to this Rune.

The Southern Rune is also under the top 3 important ones. It can get ARMOR %, DAMAGE %, HEALTH %, and SHEILD %. Both Critical Chance % (CC) and Critical Damage % (CD) are unique to this rune. IMPORTANT; many characters need either CC or CD; a a result I personally never sell these.

The Northeast Rune is most likely the most important. It can get ARMOR %, DAMAGE %, HEALTH % and SHEILD %. The Northeast Rune can also enhance Accuracy, which I personally always sell unless the secondary stats are amazing.

We all know that going first 99% of the time is always good and greatly enhances the player’s chance to win. NEVER EVER Sell speed primary mods! Speed is the only statistic that stays flat and does not turn into a %.

As said earlier, no secondary stat may appear if it the same as the primary, this being said, every single primary stat can appear as a secondary.

For example I have a South Rune with a primary of CC. Secondaries can be everything, from armor to speed. Rune sets are also very important as they can also enhance basic statistics even more. In Dragon Champions these sets are called “words.” There are 8 sets; 3 of them take 4 Runes to make a “word” and the rest only need 2 Runes.

IMPORTANT NOTE: the percentage added from each statistic is taken from the characters BASIC stats!

The sets needing 4 Runes are:

The sets only needing 2 Runes are;

This is all so far folks on describing the basics of Runes and how they work! Please leave a comment if you have any edits or additions to this content or Tweet us @GamingFansDFN.

Below we list the Best Runes for each character in Dragon Champions. Note that these are our recommendations based on the character kits and actual gameplay and we hope they help you in your quest to dominate.