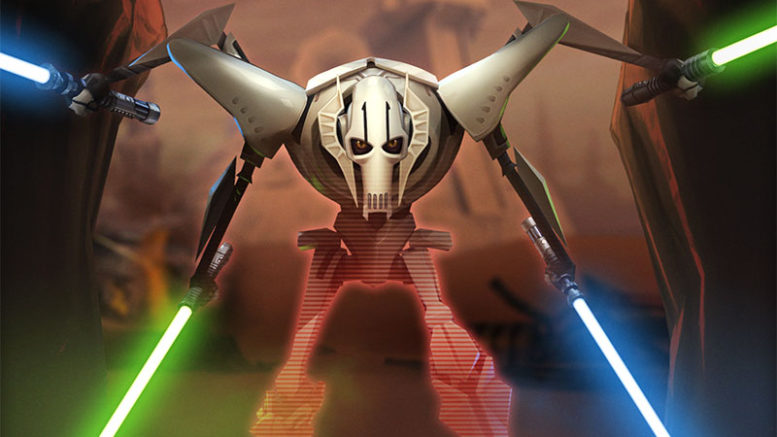 The SWGoH GameChangers are back with another kit reveal for what is to come in Star Wars Galaxy of Heroes. A day after AhnaldT101 revealed the General Grievous rework (text of abilities below), we’re happy to unveil the IG-100 MagnaGuard rework and the Droideka’s new kit.

Basic – Furious Assault
Final Text: Deal Physical damage to target enemy and inflict Healing Immunity for 2 turns. This attack can’t be evaded or countered. If the target was already debuffed deal 30% more damage. Grievous’ attacks deal damage based on his Max Health instead of his Physical damage.

Special 2 – Skittering Horror (Cooldown 3)
Final Text: Gain Health Steal Up for 2 turns, then deal Physical damage (based on Grievous’ Max Health) to target enemy and Stun them for 1 turn. If the target was already debuffed they lose 10% of their Max Health (excludes Raid Bosses), which can’t be resisted, and Grievous gains 10% Max Health for the rest of the encounter. This attack can’t be evaded.

Leader – Daunting Presence
Final Text: All enemies have -40% Critical Avoidance and -50% Defense. Whenever a Dark Side Droid ally is resisted, that Droid gains 10% Potency (stacking) for the rest of the encounter. When a Target Locked enemy is damaged, each Droid and each Separatist ally gains 2% Turn Meter, doubled for Grievous. When damaged by an attack, Dark Side enemies lose 5% Turn Meter, and Light Side enemies lose 2% Potency (stacking).

Unique 1 – Metalloid Monstrosity
Final Text: At the start of Grievous’ turn, all other Droid allies take damage equal to 8% of his Max Health, doubled for Light Side Droids and he gains 5% Max Health and Potency for each other Droid ally for the rest of the encounter. This damage cannot defeat characters.
At the start of every character’s turn, if Grievous is below 100% Health, he dispels all debuffs on himself and inflicts Marked on the other healthiest Droid ally until the end of the turn. Whenever a Droid or Separatist ally is defeated, Grievous dispels all debuffs on himself, resets all ability cooldowns, and gains 1 bonus turn.

Basic – Twin Blaster Cannons
Final Text: Deal Physical damage to target enemy. Additionally, if the target has higher Speed than Droideka, deal true damage (ignores Defense but can’t critically hit) which scales based on the difference in their Speed.

Special 2 – Reconstructive Revolution (Cooldown: 3)
Final Text: Dispel all debuffs on Droideka and gain Damage Immunity (can’t be copied) and Tenacity Up for 2 turns. Then, recover 10% Protection for each stack of Charge.

Unique – Deflector Shield Generator
Final Text: Droideka gains 10% Turn Meter and a stack of Charge for 1 turn whenever an enemy takes a turn. Additionally, Droideka recovers 10% Protection whenever it damages a Target Locked enemy.
Droideka has +50% Speed and +25% Evasion unless it has Damage Immunity. If Droideka has Damage Immunity, it has -50% Speed and a 35% chance to assist dealing 50% less damage whenever another Separatist ally uses an ability (limit once per turn).
Charge: +5% Offense per stack

Basic – Electrostaff Assault
Final Text: Deal Physical damage to target enemy with a 70% chance to inflict Target Lock for 2 turns. If target was already Target Locked, MagnaGuard dispels all debuffs on itself and another random Separatist ally.

Special 1 – Disruption (CD – 3):
Final Text: Deal Physical damage to all enemies and dispel all debuffs on all Separatist allies. MagnaGuard and General Grievous gain Speed Up for 2 turns.

Special 2 – (CD – 3): Stunning Strike (NEW ABILITY)
Final Text: Deal Physical damage to target enemy and dispel all buffs on them. Then, Stun them for 1 turn. If no buffs were dispelled, reset the cooldown of this ability.

Unique – Relentless Assault
Final Text: MagnaGuard has 70% counter chance and gains Taunt for 1 turn when it uses an ability during its turn. General Grievous and MagnaGuard gain 20% Tenacity and 20% Defense for each Target Locked enemy. The first time MagnaGuard reaches 1% Health, it takes 1 bonus turn and then is defeated. During this bonus turn, MagnaGuard has +100% Offense.