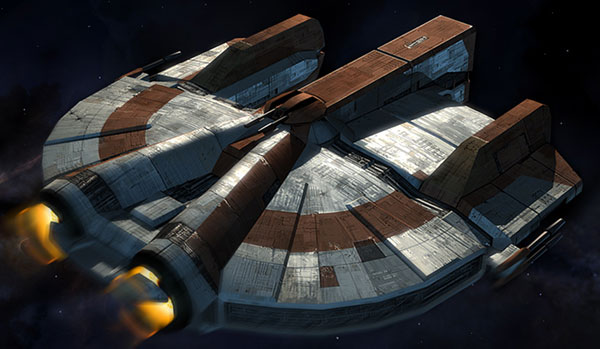 In a move that surprised much of the community today, the Ebon Hawk was announced to be the latest addition to the Ships in Star Wars Galaxy of Heroes. The Ebon Hawk “was a Dynamic-class freighter and a smuggler ship” according to Wookieepedia and was, from the way I viewed things playing Knights of the Old Republic years after its release, the Millennium Falcon of the original KOTOR game. Here is a look at the Ebon Hawk’s kit below.

Special 1 (Carth Onasi): Potent Pilot (Cooldown 3)
FINAL TEXT: Deal Physical damage to target enemy and dispel all buffs on them. This attack deals 20% more damage for each ally with Chaff, and can’t be evaded by Sith enemies.
Chaff: Immune to Target Lock

Hardware: Special Delivery
FINAL TEXT: Enter Battle: Dispel Target Lock from all allies and grant them Chaff for 2 turns. Dispel all buffs on all enemies and inflict Evasion Down on them for 2 turns, which can’t be evaded.

Be the first to comment on "SWGoH: Ebon Hawk announced to be joining Galaxy of Heroes"