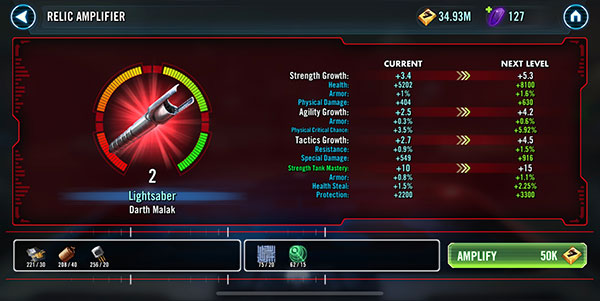 Continuing the Relic Review series, this article will focus on the relic for SWGoH’s strongest Sith & Sith Empire member, Darth Malak. As always these reviews compare a character at Relic level 0 with Relic level 7 and mods are not factored in.

To start off, Darth Malak was given a 2,385 Special Damage increase which is worthless because none of his attacks deal Special Damage. While this is true across many of the Relic upgrades in the game, it just complicates things for SWGoH players. However, Malak’s attacks will certainly benefit from the 1,535 boost he gains, bringing his Damage total to a respectable 5,633. In addition, Malak gains a very nice 15.58% increase to his Critical Chance, bringing his base total to 47.25%.

Looking at the Defensive side, Malak gains meager increases to his Resistance and Health Steal, 4.73% and 6.75% respectively. While the 10.4% increase to his Armor may not sound like much, his total Armor increases to 61.61% which is quite significant. Malak’s Relic increases his base Health by 19,728, boosting it from 45,056 to 64,784. Also relevant is the 9,900 increase to his Protection, taking his total to 78,590. Since Darth Malak converts his Protection into Max Health at the start of battle, this brings his total Max Health to 143,374. Because Darth Malak is the primary tank on a Sith Empire team and is usually the last member standing, Max Health is by far his most important stat.

While Darth Malak doesn’t gain top tier stat increases from his Relic upgrades, he is a core member for the (current) best team in the game. In addition, he is a top 3 character in the game after Relics and this does not seem to be changing any time in the near future. Because of these facts, I give Darth Malak’s Relic an A+