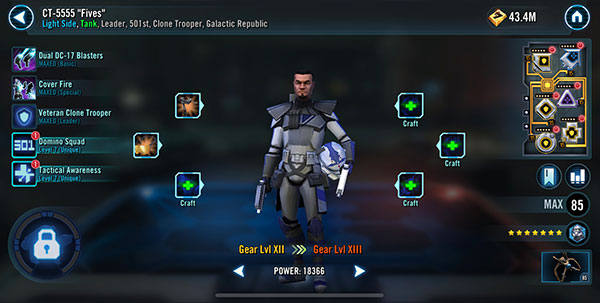 In another installment of the SWGoH Relic Review series, we’re going to take a look at CT-5555 (Fives) and his relic, a pair of Twin DC-17 Blasters. As always, these articles compare a character at relic level 0 to relic level 7 and mod enhancements are not factored in.

First we’re going to look at Fives’s defensive numbers. He gains a very beneficial Health boost of 19,728, bringing his Max Health to 57,696. In addition, Fives is one of the few who gain a useful 9,900 Protection bonus from their Relic, taking his total to 60,493. The 8.98% Armor increase and 6.66% Resistance increase are both well below average and rather disappointing.

Looking at his offensive numbers, we’ll see another below average gain in Fives’s Physical Damage boost of 1,535, giving him a total of 4,817. This is greatly enhanced by the 100% Offense gain he receives when Echo is present and Fives is not taunting. In addition, Fives gains an extra 15.54% Physical Critical Chance and a 6.75% boost to his Health Steal. Because Fives only deals Physical Damage, we will ignore the increase to his Special Damage.

While the stat gains from his Relic aren’t very impressive overall, there are three important factors worth mentioning. The first is that Fives is one of the few members of the 501st faction which will very likely be crucial for the upcoming Light Side Geonosis Territory Battle. The second is that his ship is a key part of a Galactic Republic fleet under the Negotiator. Finally, Fives is capable of granting his Health, Protection, Offense and Speed to other 501st Clone allies. This greatly enhances many of the stat gains from his Relic when used on a Clone team. Due to these factors, I have Fives in the High Priority tier. He will be very useful for several game modes and his value is trending upwards.