Since the game’s launch in 2016, Transformers: Earth Wars has featured bots that can be acquired in 1-star, 2-star, 3-star and 4-star variations. The game is simple – the higher the stars for the bot, the higher the statistics. Since every mobile game we cover here at Gaming-fans.com, TFEW included, is based on math, it is pretty obvious that the higher the stats the more effective the bot will be. Of course the introduction of 5-star bots in TFEW takes these stats to a new level. Optimus Prime, for example, at 4-stars and level 60 has 22,400 health and a DPS of 352.8, while his 5-star version at level 60 has 26,700 health and a DPS of 407.1. While these mathematical differences are not Earth-shattering, any endgame player will tell you that these small advantages are the difference in a key win or loss in a crucial War battle. 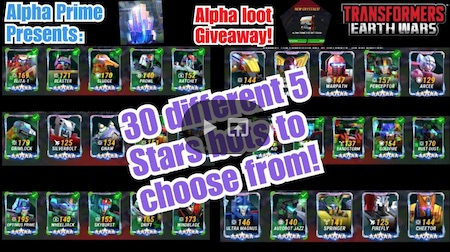 Today we take a look at the current 5-star bots in TFEW and rank the best bots available in the game. While more 5-star bots will obviously be added over time, we will work to keep this article updated to ensure it remains accurate. While I am no Whale, I do spend in Transformers: Earth Wars and have over 50 bots at 4-stars with a very deep roster, so I am quite familiar with the different variations of each of these bots. However, I am sure that others will have opinions they want to share and we welcome that by contacting us on Twitter @GamingFansDFN. Also be sure to check out the latest video about 5-star bots from Alpha Prime as he shows the 5-star bots used by many of the top players in Transformers: Earth Wars.

To prove the point above about other opinions, shortly after publishing I was made aware of Sunstreaker Wozza’s video and ratings of each 5-star bot that included Goldfire/Ramjet near the top. Out of respect for that list I have added the pair to my Honorable Mention list since I do not have nearly the experience with these bots and trust his expertise.

Note any statistics mentioned below will be based on their 4-star and 5-star versions and always compared at level 60 with stat enhancements from Power Cores in TFEW not factored in.

Special thanks to TFEW YouTuber Alpha Prime for his feedback on these rankings.

5) Prowl/Brawl – A bot that most anyone playing TFEW has is Prowl/Brawl, so we should all be familiar with how these gunners work. Prowl and Brawl have a very high DPS at both 4-stars (450.3) and at 5-stars (519.6) and have the highest damage to a single target of all of the gunners in the game. Coupled with a G1 core or a Artillery Command – Attack Squad Core, their special ability can do massive damage.

4) Blaster/Soundwave – A bot that can be underrated at times, Blaster makes a fantastic Outpost defense bot when you have him at high levels. His minions gain more of his damage as they are upgraded in his special ability, so investing Spark into this Special Class bot makes him more effective on offense or defending against bots attacking your base. In addition, Blaster makes a great attacker in Wars because his minions distract and soak up so much damage and have a high DPS.

3) Ratchet/Hook – The “best healer in the game” according to TFEW YouTuber Alpha Prime, Ratchet (or his Decepticon equivalent Hook) does his job and does it well. With just 6,690 health at 4-stars, the 5-star version of Ratchet checks in at 7,980 health, a much-needed increase to keep him healing his allies. Add in a G1 core and the heal beam can be enhanced nicely while also adding a 25% movement speed.

2) Elita-1/Lugnut – Much like Springer, Elita-1 & Lugnut’s value is increased even more by the addition of the Elimination Mode in TFEW. With using fewer bots to win a battle being even more important, bots like Elita-1 and Lugnut who can solo mid-range boards are atop the list of the best in the game currently. Statistically, a 4-star Elita-1 has 20,000 health and 325.2 DPS at level 60 while the 5-star version checks in with 23,900 health and 375.3 DPS. 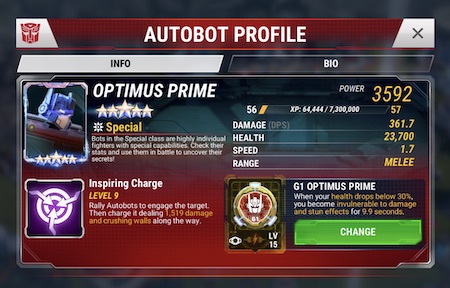 1) Optimus Prime/Megatron – As mentioned above, OP has 22,400 health and a DPS of 352.8, while his 5-star version has 26,700 health and a DPS of 407.1. Given his role as a Special Class bot who acts as a Warrior with the OP Rush, that health stat is incredibly important in Wars and whenever you are power leveling your bots on the weekends. Given Optimus Prime & Megatorn’s value in the game and how impactful they can be, especially when equipped with their G1 cores, it’s hard to argue with anyone being ranked higher than the leaders of the Autobots and Decepticons.

Be the first to comment on "TFEW: Ranking the Best Bots at 5 Stars"